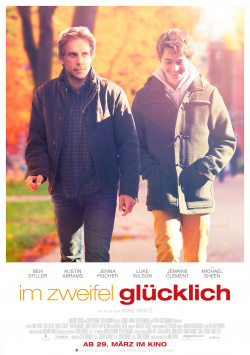 When in Doubt, Happy

Actually, Brad (Ben Stiller) could be really proud of his life: he has a good job, a loving wife (Jenna Fischer), and a talented son who will soon be going to college. But while traveling down the East Coast with Troy (Austin Abrams) so the boy can look at different colleges, Brad is confronted with memories of his own youth. He thinks of all his friends from back then who are so much more successful than he is. And suddenly Brad finds himself in a deep crisis of meaning, from which he can only extricate himself when he realizes that success does not have to mean happiness.

Director Mike White has staged a melancholic midlife crisis drama with Im Zweifel glücklich, but it has one problem: protagonist Brad is whining at too high a level. He's actually doing really well, but he spends the entire film feeling sorry for himself. And that can get on your nerves a bit in the long run. Ben Stiller plays the role terrific and seems very authentic. But especially when he tries to cover up his frustration with put-on self-confidence, puts obstacles in his son's way or makes a fool of himself in front of other people, it's hard to have any real sympathy for him.

What White does well is debunk supposed illusions, especially when it comes to the mistaken belief that the grass is always much greener on the other side. Brad only knows of his childhood friends what he reads on social media or hears through third parties. So he builds up an ideal image of their lives, against which his actually seems a bit pathetic. How reality is then set against these ideas is one of the film's great strengths, revealing that Brad's fears, self-doubt and the envy he has projected onto the other men ultimately have their roots somewhere else entirely.

Happy in Doubt manages very well to trace the mid-life crisis of a man who simply can't cope with his middle-class status in the face of a society that demands you be young, rich and sexy even in your forties. The message of the film is clear: look twice, and you might succeed in realizing that what you're looking for is exactly what you already have. Unfortunately, it is only partly entertaining and a bit exhausting to watch, which is why the deserved "worth seeing" is only given with reservations!