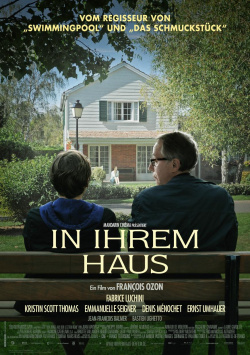 Teacher Germain (Fabrice Luchini) is frustrated. His dream of becoming a great writer was dashed years ago. And among his students, there also seem to be more and more idiots every year. Instead of being able to pursue his love of literature, he has to correct terrible essays written by his students, in which there hardly seems to be a grammatically correct sentence. But then an essay catches Germain's interest. In it, 16-year-old Claude (Ernst Umhauer) describes with great linguistic finesse how, under the pretext of helping his classmate Rapha Jr. (Bastien Ughetto) under the pretext of wanting to help him with his maths. His observations of the middle-class family come across as a bit contemptuous, but have a tremendous fascination not only for Germain, but also for his wife Jeanne (Kristin Scott Thomas). The teacher now feels a duty to nurture his student's talent, and so he urges Claude to keep writing, to keep observing the lives of Rapha Jr. and his family. But Germain's zeal soon has unforeseen consequences that seem beyond his control.

With In Her House, director Francois Ozon once again proves his incredible versatility. Whether quiet dramas about loss and death (The Time That Remains, Back to the Sea), cleverly constructed thrillers (Swimming Pool), costume dramas (Angel) or musical comedies (8 Women), Ozon seems to reinvent himself with each of his films. This is also true of his latest work. After the rather light boulevard comedy The Jewel, he delivers an incredibly intriguing blend of comedy, thriller and psychological drama with In Her House. Ozon's free adaptation of the play The Boy from the Last Row by Juan Mayorga delights with a cleverly constructed dramaturgy in which the line between reality and fiction blurs more than once. Again and again one wonders whether what Claude puts down on paper springs entirely from his enormous imagination, or whether he is merely reproducing what he observes very carefully. Does he just want his teacher's attention, does he crave the affection of Rapha's mother, or do his essays merely serve to cleverly manipulate Germain?

Through Ernst Umhauer's superb acting, the audience becomes as fascinated as Germain and his wife by Claude's tales. Ozon builds suspense here with simple means, which he repeatedly lightens with lighter, humorous moments. The scenes between Germain and his wife in particular, as she desperately tries to keep their small gallery alive with some unusual art, are brimming with intelligent wordplay and genuinely funny ideas. The great artistry in these moments is that the viewer can sit back and relax here and, like most of the protagonists Claude influences, be lulled into a sense of security that doesn't seem to exist.

Seldom have light entertainment and dramatic depth, relaxed comedy and emotional tension been so close as in this film. Ozon does a first-rate job of playing on a wide variety of emotional strings, creating a mutually reinforcing interaction. The humorous moments seem more amusing because of the psychological tension, the dramatic aspects more emotional because of the loose scenes. Building such an emotionally layered framework is a testament to the craftsmanship of the director, who has undoubtedly delivered one of his masterpieces here.

He exercises social criticism without raising a moralistic finger, tells of failed existences and unfulfilled longings without depressing, and he makes the audience laugh without diluting the rest of his story as a result. In Her House is a masterful example of skillfully blending sophisticated arthouse cinema with light entertainment fare. A great film that should definitely not be missed, especially by lovers of more sophisticated French cinema. Absolutely worth seeing

Cinema trailer for the movie "In her house (Frankreich 2012)"
Loading the player ...