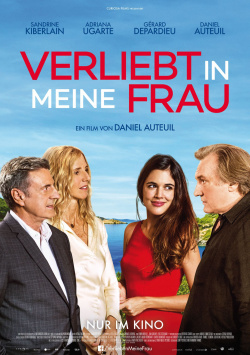 In love with my wife

When Daniel (Daniel Auteuil) meets his old friend Patrick (G&eacute;rard Depardieu) again, he unceremoniously invites him to dinner - much to the displeasure of his wife Isabelle (Sandrine Kiberlain), who actually wants nothing to do with Patrick since he left his wife for a younger woman. And of all things, he wants to introduce them to this new woman at dinner. Trouble is already preprogrammed. But Isabelle keeps a straight face for the sake of her husband - until she notices that he also falls for the charm of the attractive Emma (Adriana Ugarte).

In love with my wife is the film adaptation of a play, which is definitely noticeable here and there in the chamber-play-like production. However, director and lead actor Daniel Auteuil uses the possibilities of cinema very well to add a very interesting and effective layer to the story. By letting his main character, embodied by himself, lose himself more and more in daydreams, the boundaries between fantasy and reality become more and more blurred for the viewer as well. And soon you ask yourself as a viewer: is this really happening or only in Daniel's head?

This makes for some amusing twists and turns that add much needed spice to an otherwise rather conventional story. Adriana Ugarte plays the young seductress very convincingly, so that one(s) as an audience member can definitely understand why Daniel gets sinful thoughts in her presence, even though he is actually happily married. And perhaps are necessary for him to realize how good he has it in his marriage - a fact he seems to have forgotten in the face of quite normal everyday routine.

In Love With My Wife is a nice comedy about the delightfully nonsensical behavior of men in midlife crisis. Snappy and originally staged, this amorous odyssey pleasantly stands out from other films that are all too readily described as typically French. It's not a masterpiece, some moments are too flat and superficial for that. But all in all, humor, timing and pace are almost perfect, which gives the whole thing a satisfied worth seeing!

Cinema trailer for the movie "In love with my wife (Frankreich 2018)"
Loading the player ...