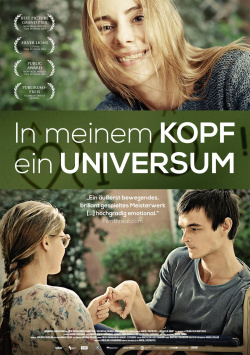 In my head a universe

Mateus (Dawid Ogrodik) loves to watch the stars and spend time with his father. He loves the glimpses of his neighbor's ample bust and the loving way his mother takes care of him. So much he would like to share all of this with his family. But Mateus suffers from a cerebral movement disorder that makes it impossible for him to speak or control the movements of his body. What makes him particularly sad is the fact that everyone thinks he is retarded because of it. Yet he perceives his environment with all its facets. When his mother can no longer manage the care of her son, Mateus is sent to a home. Here his unbroken will to live threatens to wither away completely. But he does not give up, for Mateus is certain: the day will come when everyone else will also realize that he is not retarded...

In My Head a Universe is based on the true story of Przemek, a physically disabled man who was considered a vegetable by those around him for years until it was revealed that his mind was fully awake and healthy. Director Maciej Pieprzyca was so taken with his story that he was determined to tell it in a film. It was important to him to strike the right tone. He wanted to avoid false consternation as well as dramaturgical exaggeration, which might have made the film more accessible to a wider audience, but would also have made it less realistic.

That's why he decided to tell the story from the point of view of Przemek, who is called Mateus in the film. His view of his environment is very revealing, but is also full of tenderness and wonderful humor. Thus Pieprzyca has succeeded in creating a very haunting mixture of drama and humorous ode to life, which at times comes across as very sad and distressing, but at other times is filled with tremendous lightness and often unexpected humor.

Of course, the performance of lead actor Dawid Ogrodik is first and foremost impressive, as at no moment does he give the impression that he is merely playing Mateus' disability. In fact, it is not until the end credits, which show footage of Ogrodik with the real Przemek, that it becomes clear what a physical transformation the actor has undergone for this role and how impressive his performance actually is.

In My Head a Universe is a moving testament to the power of the human spirit. The film is an entertaining, ironic and also revealing look at our society and our treatment of disabled people. It's a film that doesn't point a finger and that can open the eyes of its viewers. It's a small film that certainly has a hard time finding a wide audience, which is a real shame. Because this wonderful story has just because of its pleasantly unsentimental staging the stuff to touch a lot of people and make them happy. And it clearly deserves an Absolutely Worth Seeing!!!

Cinema trailer for the movie "In my head a universe (Polen 2013)"
Loading the player ...