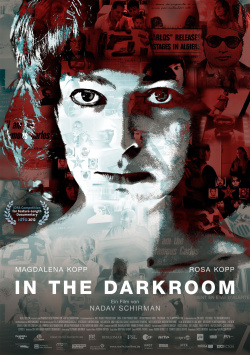 The story of terrorist Ilich Ram&iacute;rez S&aacute;nchez, nicknamed Carlos the Jackal, has been told extensively, most recently in Olivier Assayas` superb thriller-drama Carlos the Jackal. Nora von Waldstätten also played a small role there as Magdalena Kopp, the woman who was married to the world`s most wanted terrorist. Kopp's story is now what filmmaker Nadav Schirman wants to tell in In the Darkroom, approaching the subject not dramaturgically but as a documentary. In long interviews with Kopp, which Schirman filmed in an old Frankfurt cinema shortly before its demolition, he lets the controversial woman present her view of things. This is filled with a great deal of remorse, but also with a certain victim attitude, through which Kopp's statements sometimes lose a little credibility.

If the film were to concentrate entirely on the conversations with Magdalena Kopp, it would therefore certainly no longer work after twenty minutes at the latest. As interesting as the approach is to learn first-hand something about how a young woman can slip into a world of revolution, terror and crime and how difficult it is to get out of it again, Kopp does not offer the viewers really deep insights or new knowledge.

However, Schirman also illuminates the events from another point of view, lets critical voices have their say. In addition, he accompanies Rosa Kopp, the daughter of Magdalena and S&aacute;nchez, on her search for the truth about her parents, but especially for that about her almost completely unknown father. Rosa Kopp comes across as much more sympathetic, honest and open-minded than her mother, and in the course of the film becomes more or less a mouthpiece for the viewer. Her journey into her family's not always beautiful past offers some really emotional moments that do the otherwise somewhat too dry documentary a lot of good.

In the Darkroom is a very ambitious documentary, but unfortunately it didn't turn out quite as interesting and exciting overall as it could have with this topic. Those hoping for new information about the man and terrorist Carlos or about the terror scene in Germany will certainly be disappointed, because what you learn here is already known things from a new angle. That's enough for a few very engaging moments, but not for a consistently riveting 90 minutes. And that's why, on balance, there's only one: worth seeing with some reservations!

Cinema trailer for the movie "In the Darkroom (Deutschland 2012)"
Loading the player ...