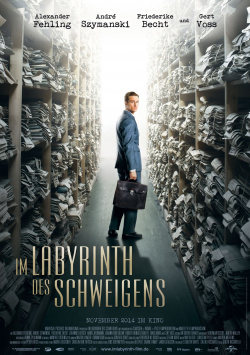 Frankfurt in 1958: Germany is just flourishing with reconstruction and the economic miracle. No one wants to be reminded of the horrors of World War II. Instead, people's lives are dominated by escapes into "Heile-Welt" films and cheerful dance music. But the past cannot simply be hushed up and laughed away. The young prosecutor Johann Radmann (Alexander Fehling) realizes this when he learns through the journalist Thomas Gnielka (Andr&eacute; Szymanski) that a former Auschwitz supervisor is now teaching small children as a teacher. However, no one wants to take up the complaint of a survivor who recognized in the teacher one of his tormentors. Only Radmann, against the will of his superiors, takes up the investigation and quickly comes up against an almost impenetrable web of repression and denial. But Radmann does not give in so easily. Together with Gnielka, he wants to gather enough evidence for an indictment and thus bring the crimes of Auschwitz to the public. To do so, he is even willing to take paths that could harm colleagues, friends, or even his young love, Marlene Wondrak (Friederike Becht). Radmann must decide whether he is willing to pay such a high price for a truth that could change Germany forever.

For his feature debut as a director, actor and filmmaker Giulio Ricciarelli has chosen one of the most important chapters of Germany's postwar years. In Im Labyrinth des Schweigens (In the Labyrinth of Silence) he traces the difficult path from the first preliminary investigation to the start of the first Auschwitz trial. Ricciarelli's aim was not to transfer history lessons from the classroom to the cinema. This would have been justified insofar as the Auschwitz Trials, in contrast to the Nuremberg Trials, are no longer familiar to most young people today. But precisely because such an important topic was dealt with here, to which as wide an audience as possible should be made aware, Ricciarelli did not want to lose sight of the entertainment value of his film.

And indeed he succeeded in doing what many German filmmakers in particular too often don't even try: making a serious topic entertaining. Based on true events, which were meticulously researched with the help of historian Werner Renz of the Fritz Bauer Institute, Giulio Ricciarelli has staged a gripping mixture of political thriller and judicial drama, in which not only the historical background, but also the protagonists and their story are extremely exciting. Especially Johann Radmann, whose first enthusiasm as a young prosecutor to achieve something more than just working off traffic violations, turns more and more into a kind of obsessive fight for the truth and against oblivion, is an extremely interesting character. The transformation he undergoes over the course of the film is brought to the screen by Alexander Fehling in a very believable way.

His portrayal is interesting in that this is the second time he has approached the horror of Auschwitz from the point of view of an unknowing person after Am Ende kommen Touristen, and the characters he plays in those films couldn't be more different to begin with. Fehling's terrific performance is supported by no less convincing performances from Andr&eacute; Szymanski, Johann von Bülow, Friederike Becht and Gert Voss, who sadly passed away in July. And the first-class work of set design, costumes, camera and music make Im Labyrinth des Schweigens a gripping and important film, which deserves to attract as many viewers as possible, especially but not only because of its subject matter.

The director and actors were also supported by Gerhard Wiese, a prosecutor involved in the Auschwitz trial, who not only served as an advisor on the set, but also had a small guest role in the film. At the premiere of the film in Frankfurt, Wiese not only emphasized the excellent cooperation with the entire team, but was also extremely impressed by the final result. No wonder, because Im Labyrinth des Schweigens is a really good film that manages the feat of combining entertainment and ambition into a captivating whole. And for that there is a very clear: Absolutely worth seeing!

Cinema trailer for the movie "In the Labyrinth of Silence (Deutschland 2014)"
Loading the player ...