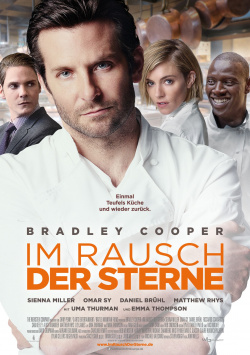 In the rapture of the stars

Once Adam Jones (Bradley Cooper) was a celebrated chef whose genius was hindered by too much ego and an unbridled passion for sex, drugs and alcohol. At some point all bridges are burnt down and Adam has only one choice: either go down completely or repent and start all over again. After three years of complete disappearance, he suddenly stands in London in front of his old business friend Tony (Daniel Brühl) and tells him that he wants to take over his restaurant as head chef and get it going. Conscious of Adam's talent, Tony agrees after initial hesitation. And when the irascible chef manages not only to win over the great Sous Chef Michel (Omar Sy), whom he deceived years ago, but also the gifted young chef Helene (Sienna Miller) for his team, Tony's trust in Adam actually seems to pay off. But then the ghosts of the past catch up with him and the oversized, self-destructive ego threatens to take control again…

Bradley Cooper played the role of a self-involved, egocentric chef in the short-lived comedy series "Kitchen Confidential" in 2005 before his big breakthrough as a movie star. Ten years later he now embodies a very similar character in the movie "Im Rausch der Sterne". The problem is that the character from the TV series, based on the real star chef Anthony Bourdain, was somehow charming and loveable despite all his airs and graces. Adam Jones, on the other hand, is just a self-destructive disgust to whom it's hard to give sympathies as a viewer. Even when you realize that behind this broken shell there might be a decent guy, he remains too unapproachable for most viewers. The success is wished to the members of his team and the people who still believe in him despite all the setbacks and insults. But Adam himself is rather unsuitable as a character with whom one feels, suffers and cheers.

The film itself as a mixture of drama and comedy is an entertaining average commodity. There are some beautifully filmed scenes that make your mouth water in the movie theater. The hustle and bustle in the starry kitchen seems very authentic and is at times extremely captivatingly staged. Moreover, there are some scenes in which the humor of the movie works wonderfully. In such moments the entertainment value of this cineastic cooking show skyrockets enormously and you can feel what a nice movie is hidden here. However, just as Adam Jones gets in the way of himself with his own ego, so his tiresome airs and graces also get in the way of the movie's entertainment value.

At some point the character just seems like a spoiled drama queen. His problems and his fears are hardly comprehensible for the viewer or at some point you just don't care. It's a real shame that the whole film has to suffer as a result. The actors are all very good, the staging is technically solid and the story itself isn't boring or uninteresting. Nevertheless: a bad movie isn't "Im Rausch der Sterne" by a long shot. If you don't expect more than nice entertainment with some amusing moments and tasty pictures, you'll be well served at the end. And that's why, despite all weaknesses, there's just one thing left: Worth seeing!

Cinema trailer for the movie "In the rapture of the stars (USA 2015)"
Loading the player ...