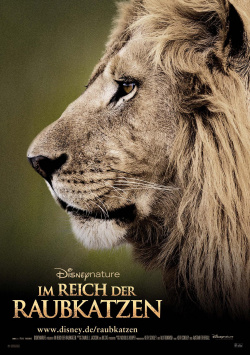 In the Realm of the Predatory Cats

The great boom in nature and animal documentaries, which began at the latest after the great success of The Penguins' Voyage and Our Earth, seems to be noticeably waning, at least in terms of audience numbers. Even high-quality documentaries such as Our Lives mobilize only a few moviegoers to buy a ticket. A shame really, as many of these works would have deserved greater popularity on the strength of their wonderful images alone. Among these films is In the Realm of the Big Cats by Our Earth director Alastair Fothergill, in which viewers can embark on a very special journey to the African savannah.

Fothergill, co-director Keith Scholey and their team captured unique images. It took high-quality equipment, two and a half years of shooting and a lot of patience. It was definitely worth it, because even if the view of the lives of lioness Mara, cheetah mother Sita or the lion Fang sometimes comes across as a bit too humanized, this animal documentary still has numerous engaging, moving and enchanting moments to offer, which come across extremely well, especially on the big screen.

The film's biggest problem is that documentaries of this nature often seem slightly tedious when they focus on just one species. Although the whole savannah habitat is presented here, in the end the focus is precisely on the titular big cats. And even if their lives, their hunting behaviour, the distribution of roles in the pack or the rearing of offspring are interesting enough to fill 90 minutes, the whole thing seems a bit drawn out in the end. Just then, if one is interested in nature documentaries of this kind, comes up sometime the feeling that one does not really get much new offered here.

No question: In the realm of the big cats is a high-quality documentary with fascinating images, interesting information and moments that make the viewer sometimes laugh and then again moved sob. If that's what you're looking for and you're interested in big cats, this beautiful film can definitely be recommended to you. But if you are hoping to be as amazed as you were in Our Earth or Deep Blue, you will probably only be captivated by Sita, Fang and Co. to a limited extent. A good nature documentary, which however hardly stands out from the mass of similar films and is therefore only worth seeing with restrictions!

Cinema trailer for the movie "In the Realm of the Predatory Cats (USA 2010)"
Loading the player ...