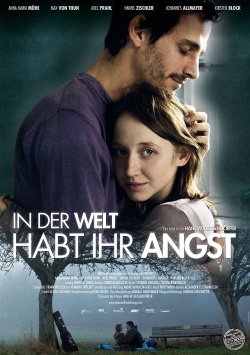 In the world you are afraid

With his latest feature film "In der Welt habt ihr Angst" Hans W. Geißendörfer, father of "Lindenstrasse", may not be the worst, but definitely the most disappointing and infuriating film in recent memory. Craftily convincingly staged, the film annoys with a script that conveys a more than questionable message in occasionally grotty dialogue.

Actually, Eva (Anna Maria Mühe) was a promising student. But then she meets the musician Jo (Max von Thun), and with this love comes the fall into drug addiction. The two want to go to rehab together in New Zealand, where they hope to make a fresh start for themselves and their offspring growing in Eva's belly. But for the flight they urgently need money, which leads to a robbery of an antique shop. But the robbery fails and Eva shoots the old owner of the shop. She manages to escape, but Jo is arrested and sent to prison for the murder. Eva realizes she needs a hiding place from which to plan Jo's release from jail. And so she nests with teacher Paul (Axel Prahl), who becomes an unexpected accomplice.

Maybe Geißendörfer's intentions were good. It may be that his interpretation of the film, which is already reflected in the film title borrowed from the Gospel and Bach Cantata No. 48, can certainly be seen in a positive light. But the impression left by this film is simply annoying. It all starts promisingly: the reaction of Eva's father (Hanns Zischler) to catching his daughter stealing from him is believable and emotionally moving. But after the murder of the antiquarian bookseller, at the latest, the story steers in a direction that really only makes you shake your head. For the murdered man is no longer dealt with at all. Rather, Eva, the tormented artist's soul who has to remind us at every opportunity that there is a talented musician inside her, is stylized as the film's victim, her deed justified by a love that is perhaps misunderstood, which is further underscored by Paul's help. Yes, she'll have to live with the guilt - but that's the least she can do and deserves no sympathy. Once again, no thought is given to the victim's survivors. Here, as is unfortunately far too often the case in our society, the perpetrator is once again the poor victim, driven to act by family and social circumstances.

Eva's ex-boyfriend, the only one who actually embodies anything like sanity, is portrayed as a crazed loner who wallpapers his room with photos of his exes and spends his time with insects. Of course, such a character has little credibility as a voice of reason. But the annoyances don't end there. For when Eva and Jo then feel each other across vast distances, she feels his pain, the whole thing also degenerates into a wholly unnecessary kitsch monzette that, however, fails to evoke the emotions while watching it that Geißendörfer must have intended.

The actors are not to blame. Anna Maria Mühe puts in a noticeable effort and Axel Prahl also plays wonderfully. On top of that, the filming location Bamberg, captured in great pictures, gives the action a very special atmosphere. But it is exactly these successful aspects that make "In der Welt habt ihr Angst" so annoying. After all, if the film were simply bad, one could live with it. But the fact that the screenplay and the direction spoil such a good realization makes you sad. The only thing that makes me happy is the fact that no money was spent for this movie.