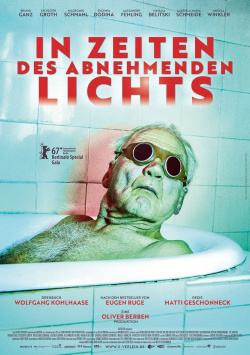 In Times of Diminishing Light

East Berlin, early autumn 1989: Wilhelm Powileit (Bruno Ganz) is having a big dinner. For the highly decorated SED party member turns 90 years old. And of course, not only his family, but also his neighbors, comrades, and even the party's new generation have to show up to congratulate him. For Wilhelm, the whole thing is more of a burden than a joy. And his wife Charlotte (Hildegard Schmahl) has a hard time keeping a straight face. But it seems to succeed. Despite cynical remarks by the jubilarian, there is singing, flowers are given and a medal is awarded. But son Kurt (Sylvester Groth) carries a secret around with him that lies like a shadow over the festivities: Grandson Sascha (Alexander Fehling) fled to the West a few days ago. He, of all people - the grandson of a member of the SED. The beautiful appearance that is frantically represented here begins to crumble - just like in the rest of the country.

In Zeiten des abnehmenden Lichts is the film adaptation of Eugen Ruge's 2011 German Book Prize-winning novel. Wolfgang Kohlhaase has significantly condensed the very complex book and has thus given his screenplay a character all of its own, which director Matt Geschonneck has underlined with his staging. The result is impressive in some ways - but at the same time a bit frustrating. There's no question that the film is superbly acted, especially by Bruno Ganz, who provides some quite wonderful moments as the grouchy jubilarian. But his standard response when he's handed a bouquet of flowers yet again is also truly delicious.

Besides that, the film is also hard to take. That's not because of the dialogue-heavy narrative flow. Rather, it's the fact that Geschonneck succeeds too well in capturing the oppressive atmosphere before, during, and after the ceremony. As a viewer, you really don't feel at ease here and almost wish you felt like the neighboring couple who have to leave the party early on Wilhelm's instructions. It may sound a bit absurd, but the film is not entertaining in an entertaining way. It probably doesn't make sense until you've seen the movie and are kind of relieved that it's over without being really bored.

There are definitely scenes that seem a little unnecessary, though, and they're not as well done as other aspects of the movie. In Times of Waning Light is, in its own way, a good movie that might have even been great. But for that, it lacks the depth inherent in the novel, as well as the momentum that some of the really good scenes reveal. Who appreciates Bruno Ganz, who will be spoiled here again with a first-class performance. Otherwise, it's more like: worth seeing with some reservations!

Cinema trailer for the movie "In Times of Diminishing Light (Deutschland 2017)"
Loading the player ...