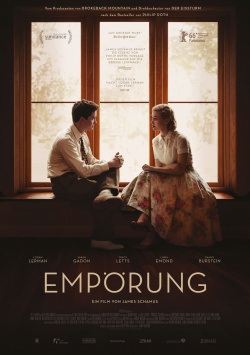 Actually, Marcus Messner (Logan Lerman) was supposed to take over his father's kosher butcher shop. But that is so not for him. Marcus definitely wants to study and thanks to his good grades he also manages to get accepted at the University of Winesburg, Ohio. Here, too, he is driven by his ambition and wants to graduate with top grades. He doesn't need any distractions. But then he gets seduced by his fellow student Olivia (Sarah Gadon), which ends in a small scandal. When he gets into a heated debate with the conservative Dean Caudwell (Tracy Letts), the model student turns into a real rebel.

Disorder is the directorial debut of successful producer and screenwriter James Schamus (Tiger & Dragon, The Ice Storm), for which he himself adapted Philip Roth's acclaimed novel. Schamus succeeds very well in recreating the 1950s, both visually and atmospherically. He very authentically recreates an era that had not yet seen a sexual revolution, and in which many young people in particular were marked by a certain insecurity. During this time, Marcus tries not to stand out. As a Jew, he is exposed to hostility, but he does not react to it. As a young man he is confronted with temptations which he resists. All in order to turn in a perfect degree so he doesn't have to become like his father.

When he then embarks on a liaison with the seductive but unstable Olivia, it's not just his hormones that go crazy. The reaction of those around him, but especially the dean of the university, causes all the incomprehension and anger towards the world that he has been swallowing inside him to erupt and steers his life in a completely new direction. Watching Marcus transform over the course of the story is thoroughly engaging and entertaining, precisely because the script is also excellently written. And Logan Lerman's performance is so convincing that you want to watch and listen to him for hours, especially during his verbal altercations with the Dean.

Disaster is a compelling drama that, while told in a very slow and leisurely fashion, never really gets tedious or even boring. Craftily directed - which is amazing, especially for a directorial debut, even if Schamus can look back on 25 years of experience in the business - and magnificently acted, the literary adaptation actually offers everything that entertaining and rousing arthouse cinema needs. For this there is clearly a: Absolutely worth seeing!