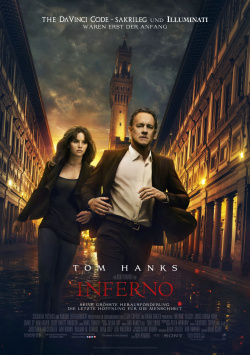 He is a master at deciphering symbols and solving puzzles. But of all things, Robert Langdon (Tom Hanks) seems to have lost his brilliant powers of deduction when he wakes up in an Italian hospital and can't for the life of him remember how he got there. Plagued by terrible headaches, terrifying visions and amnesia, Langdon soon finds himself on the run with young doctor Sienna Brooks (Felicity Jones) from a mysterious adversary who not only seeks Langdon's life, but is willing to release a global virus that would wipe out half the world's population. And Robert Langdon seems to hold the key to the only way he can still stop this catastrophe - if only he could remember.

After the first two adaptations grossed over $1.2 billion worldwide, director Ron Howard and lead actor Tom Hanks return with the third Dan Brown adaptation, Inferno. Once again, Hanks sets out to save the world as symbologist Robert Langdon on a scavenger hunt of a very special kind. This is also entertaining in the third attempt and for long stretches also very exciting. But especially at the beginning the production seems a little bit ponderous. The attempt to visualize Langdon's dizziness, his confusion and his pain are a bit exhausting in the long run and slow down the action significantly. His horror visions, on the other hand, are darkly and grippingly realized and make up for the weaknesses of the production here.

However, the rest of the film simply lacks the necessary kick. Somehow you get the feeling that everyone involved here just delivered a commissioned piece of work without really putting much passion into it. This starts with the music by Hans Zimmer and ends with the solid, but also a bit ponderous acting by Tom Hanks. Only the scenes with Irrfan Khan really stand out and show what great entertainment potential this thriller has. No question, it never really gets boring. Howard and Hanks are too much professionals to let it get that far, especially since Dan Brown's original also offers enough suspense potential. And yet, it's actually only the finale that is a real cinematic spectacle, while the beginning rather bobs along at a good TV level.

Now this may sound like Inferno would be a bad or at least very average movie. That's not the case, of course. Robert Langdon's third cinematic adventure also provides very good entertainment. But considering what Tom hanks and Ron Howard have delivered together and separately in the past, you just get the feeling in places that they didn't really put much heart into this one. For solid suspense cinema with some good show values and a few really good scenes it's enough and therefore there is - with small deductions in the B grade - also a deserved: Worth seeing!