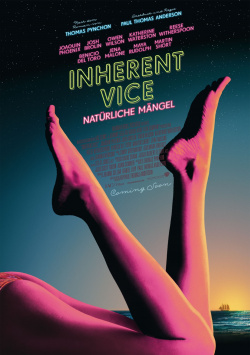 When private detective Doc Sportello (Joaquin Phoenix), apparently under the influence of marijuana, receives a visit from his ex Shasta Fay (Katherine Waterston), he does not suspect that this is the start of one of the craziest events in his career. Because she claims that her new boyfriend, the heavily rich real estate agent Mickey Wolfman (Eric Roberts) could soon become the victim of an intrigue planned by his wife and her lover. According to this, Mickey is to be kidnapped and put in a mental hospital. When Doc at the same time receives the order to locate an ex-prisoner who turns out to be Wolfman's bodyguard and is beaten down during the search, only to wake up next to the man's body, the story becomes more and more confusing. The efforts of the cop Christian F. "Bigfoot" Bjornsen (Josh Brolin) to win Doc as informant for the LAPD in this case, as well as the disappearance of the saxophonist Coy (Owen Wilson), who Doc is also supposed to solve, additionally ensure that the private detective gets lost more and more in a confused web of intrigues, lies, crimes and drugs. Even the otherwise so reliable joints don't help any more to get a clear head…

There are directors who, as film critics, feel a real obligation to praise their films as going to heaven - even when they have been staged completely past the taste of the audience. Since "Boogie Nights", "Magnolia" and "There will be Blood" Paul Thomas Anderson clearly belongs to those filmmakers who deliver one supposed masterpiece after the other. And since he also tried his hand at a novel by cult author Thomas Pynchon for his latest film, this can only have become great cinematic art with cult potential. Or?

Now, if you like completely overloaded drug trips with pseudo-intellectual voice-over comments, half-cooked jokes and an extremely confused story, then "Inherent Vice - Natural Defects" must actually be called a masterpiece. Granted, there are really some very good moments in the movie, for which Josh Brolin or Martin Short are primarily responsible. But those who don't automatically get into raptures with psychedelic-headed stoner comedies could quickly get annoyed despite the positive aspects of Joaquin Phoenix's confused story and overdone game.

Sure, it can be quite refreshing if a film is not suitable for mainstream, strives for unadapted humour and makes use of an unclearly constructed plot framework. On the other hand, a movie that swims against the tide in every respect is also not necessarily a grandiose piece of art cinema that is above any criticism. In the case of "Inherent Vice - Natural Defects" there is no question that the film is first-class in terms of craftsmanship. You can see in almost every shot how much importance Paul Thomas Anderson placed on the interplay of images and music, on small details, on equipment and authenticity. And it's also noticeable to the actors that they had a lot of fun playing a bit weirder roles. But that doesn't change anything about the confusing story, the generally very bulky staging and the affectious comments, which at least in the English original version are extremely tugging at the nerves of the audience because of the unbearably bored off-voice.

Fans of the director, who already thought "The Master" to be a misunderstood masterpiece, will definitely find "Inherent Vice - Natürliche Mängel" great. And for such an audience the film is without a doubt also absolutely worth seeing. And probably even viewers who are in a similar state to Doc will be able to discover a lot of fun and genius in the film. However, if you hope for a light crime comedy or bizarre entertainment of the entertaining kind or if you think "There will be Blood" was too exhausting for you, you should better keep your hands off this work. Conditionally worth seeing!