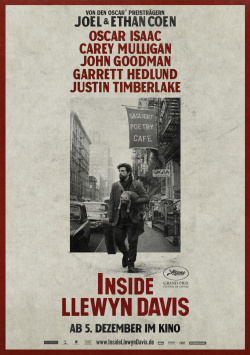 New York in the winter of 1961: Llewyn Davis dreams of making a career as a musician. As part of a duo, he's been close to the big time. But after his singing partner commits suicide, Llewyn's career doesn't quite work out. His solo album lies like lead on the shelves and his money is neither enough for his own apartment nor for a decent winter coat. And so he has no other choice but to scrounge from his acquaintances and colleagues and to organize a warm place for the next night. In the process, he realizes again and again that his eccentric and yet rather self-absorbed behavior has ensured that he has no real friends. Even the good-hearted musicians Jim (Justin Timberlake) and Jean (Carey Mulligan), with whom Llewyn is staying from time to time, are getting fed up with the good-for-nothing. But a new opportunity opens up for the passionate folk singer to make it big after all. And so he embarks on a journey to Chicago that could change everything.

Inside Llewyn Davis is the latest prank by the Coen brothers Joel and Ethan. That the two are two brilliant minds is probably beyond question. They are masters at crafting dialogue with enigmatic wit and telling their stories in a way that works on multiple levels. In many ways, Inside Llewyn Davis is also really a typical Coen film. A great cast, some really well-crafted dialogue, engaging imagery and - if you have a soft spot for folk music - a top-notch soundtrack all speak to the fact that the Coens have managed to create yet another masterpiece. But there are a few aspects to the film that permanently spoil this impression.

One of these aspects is the fact that the story is told in a rather episodic fashion, with only a rudimentary story arc to hold these individual snapshots together. It's true that the ending makes it clear what the filmmakers' intentions are with this construction of their story. Nevertheless, there is also the impression that there isn't really any development, neither in the events nor in the acting characters. And that leads to the second problem of the movie: the main character is an unsympathetic egoist, who can only show something like feelings in his songs, but who always acts like a self-absorbed creep towards his fellow men. Even though Jean is always throwing this at him in very clear words, and even though he has to realize several times during the movie that he is standing in his own way with his way, he doesn't show any kind of development at all. And that is just not exciting for the viewer to watch.

It may well be that the film has a level that reveals a truly stirring genius, which then justifies the many downright adoring reviews and the now already numerous awards and nominations. But while this cinematic love letter to the folk music scene at a time just before it was revolutionized by Bob Dylan is first-rate cinema in terms of acting, at first glance the film is at least one thing: a rather dull portrait of a man who is merely the walking cliché of a broken artist's soul, and who is thus nowhere near as interesting as the film would have us believe.

Whoever thinks A Serious Man by the Coen brothers is a masterpiece will surely be able to say the same about Inside Llewyn Davis. But if you need more for good cinema entertainment than a maybe ingenious, but well hidden subtext and some really great snapshots, you will rather experience beautifully filmed boredom here, which in the end only leaves you wondering why you should invest your time and money to dive into the twisted mind of an unsympathetic character like Llewyn Davis. For this, despite the Coen bonus, there is then only one: conditionally worth seeing!

Cinema trailer for the movie "Inside Llewyn Davis (USA 2013)"
Loading the player ...