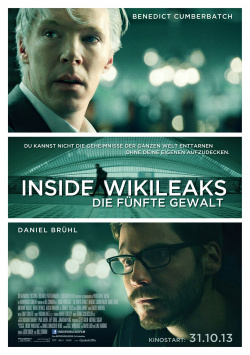 Inside Wikileaks - The Fifth Estate

The fact that the story surrounding the WikiLeaks disclosure platform and its controversial founder Julian Assange makes for exciting cinema material has not only been recognised by filmmaker Alex Gibney, who released the documentary We steal secrets: The story of WikiLeaks in cinemas a few months ago. Oscar winner Bill Condon has also recognized the potential of the story. Based on the two books Inside WikiLeaks by Daniel Domscheit-Berg and WikiLeaks by David Leigh, he has staged a dramaturgical treatment of the events, which is prominently cast, but emotionally arguably undercooled.

Inside Wikileaks - The Fifth Estate tells of the young computer scientist Daniel (Daniel Brühl), whose life changes abruptly when he meets former hacker and activist Julian Assange (Benedict Cumberbatch). Their ideals seem to absolutely coincide and so together they devise an internet platform that will allow so-called whistleblowers to publish absolutely anonymous revelations about the powerful of this world that are otherwise unattackable. Government secrets that should never be made public, industrial crimes that should be covered up with all their might - Assange wants to publish this and much more with Daniel's help and thus change the world a bit. Quickly, WikiLeaks manages to present revelations that even major news outlets could not uncover. But when they come into possession of thousands of pages of confidential intelligence documents, the unfiltered publication of which could endanger the lives of innocent people, Daniel and Assange are forced to ask themselves whether the end really always justifies the means and whether it might not be time to rethink their ideals a little and the once trusting relationship between the two men threatens to break in the face of this conflict.

It has to be credited to Inside Wikileaks - The Fifth Estate that, especially at the beginning, the film is obviously concerned with not presenting the story in too one-sided a way and degenerating into some kind of hounding of Julian Assange. Especially at the beginning, Condon makes it clear more than once with the character of Daniel how good and important the intentions were that led Assange and Domscheit-Berg to work together on the disclosure portal. That their work really made a difference and that the world could use more people who fight injustice with a similar determination as Julian Assange does - or at least thinks he does. For at the same time, the film also makes it abundantly clear that it is Assange himself, his ego and what the makers see as his somewhat confused mind, that stands in the way of what should be noble goals.

Unfortunately, the production and also Benedict Cumberbatch's performance lack the subtlety that would have been necessary to make the film seem balanced, especially in the final third. There is probably also no question that Julian Assange is a somewhat opaque figure who is simply difficult to grasp. But as good as Cumberbatch's acting may be - aside from a truly awful dance number, perhaps - his interpretation of Julian Assange makes the WikiLeaks founder seem slightly insane and not exactly likeable from the first moment. And that's exactly why, despite obvious intentions to the contrary, the film also feels like a swan song for Julian Assange and his disclosure platform right from the start.

But that's not the film's real problem. What Inside Wikileaks - The Fifth Estate struggles with most is its pacing. Despite an excellent international cast and atmospheric imagery, the whole thing is simply at least 30 minutes too long. Constantly watching the programmers and hackers either sit in front of computers or party at some convention is just boring in the long run. Furthermore, it's hard to follow some parts of the plot without any real prior knowledge. So in the end, the overall picture is not quite balanced, struggling with many lengths, lack of subtlety and unused potential. This is a great, great pity considering the good actors and the story, which is really exciting in itself. And that's why the bottom line is only one: conditionally worth seeing!

Cinema trailer for the movie "Inside Wikileaks - The Fifth Estate (USA 2013)"
Loading the player ...