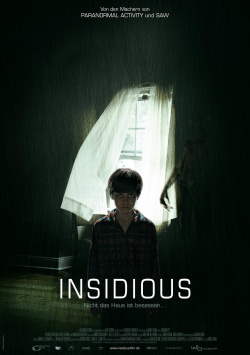 With Saw, James Wan has arguably created one of the most successful horror series of the last twenty years. His attempts to make audiences creepy outside of the franchise have been met with rather little success. Until now, because with Insidious Wan delivers a small but fine scary movie, which in some places shamelessly steals from other representatives of the genre, but thanks to perfectly used sound effects and shock moments can entertain extremely well.

It all starts with the move to a new house. Actually, a new and above all better life should begin here for Josh (Patrick Wilson), Renai (Rose Byrne) and their three children. But it soon becomes apparent to the family that their new home is surrounded by a mysterious secret. When son Dalton (Ty Simpkins) falls into a coma after an inherently mild fall and the doctors are faced with an absolute mystery, Josh and Renai must take unusual approaches to save their son. For what is keeping Dalton in his coma is truly not a medical cause, but a demonic force with a literally diabolical goal.

Insidious mixes Paranormal Activity with Poltergeist (I + II), throws in a little bit of The Exorcist, and stirs it all up into a rather effective contribution to the horror subject. After the rather ineffective Dead Silence and the revenge thriller Death Sentence with Kevin Bacon, Wan has returned to top form with Insidious. The film works best when it uses very simple means. Eerie noises, strange shadows, shadowy figures - when Wan uses such familiar means, the viewer can get really creeped out. Probably one of the reasons why this low-budget production has become a real surprise hit in the USA.

But when Elise Reiner, played by Lin Shaye, shows up with her assistants to finish off the demon in best Ghostbusters and Poltergeist manner, special effects are used more and more often, which work less well. And towards the end, when the computer has obviously been put to greater use, the proceedings threaten to drown in unintentional comedy. Against creaking floors or pounding doors, demonic parallel worlds just can't compete in terms of creepiness factor. Here we see that simple tricks can sometimes be much more effective than elaborate computer gimmicks.

But on balance, the rather disappointing finale has little effect on the overall very good impression Insidious can leave on the inclined scary fan. The genre appropriate acting, the atmospheric direction of James Wan and the well stolen story make this small but fine mystery horror a must for all viewers who found Paranormal Activity too boring, but SAW vil too bloody and brutal. Highly recommended!

Cinema trailer for the movie "Insidious (USA 2010)"
Loading the player ...