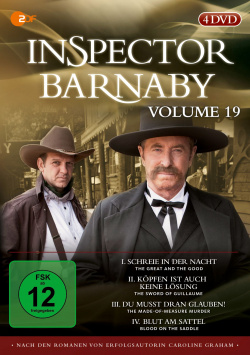 Content: Slowly John Nettles is also approaching the home stretch in Germany. While he has already retired his parade role Tom Barnaby in his home country in 2011, the German fans still have a few unsent cases that delay the farewell a little. Even if it will continue with the successor Neil Dudgeon alias John Barnaby, the departure of John Nettles after fourteen years of series but a decisive break. But this 19th DVD box with episodes from the 12th and 13th season is a very good proof that this also makes sense.

Because although the murderous goings-on in the picturesque county of Midsomer still proves to be extremely entertaining and the sometimes quite bizarre inhabitants, who assassinate, scheme, lie and cheat for all they're worth, simply reveal a lot of entertainment potential even after all these years, the concept, which has hardly varied over the years, cannot hide slight signs of fatigue. While the creators are now and then trying for variety, this does not always work equally well, as one must note in the rather disappointing episode blood on the saddle. Still, even a weak Barnaby is often still better than some other TV fare. And so fans will continue to enjoy these four new cases as Barnaby and fellow DC Ben Jones (Jason Hughes) try to put a stop to Midsomer's bad fingers.

And that's what the new episodes are all about:

Village school teacher Connie Bishop calls for help at night, convinced a burglar is in the house. But neighbors can't find anyone, not even clues. The next day Connie sleepwalks through her garden covered in blood. There lies a dead man who stalked her while she was alive. A short time later, Laurence Mann, a locksmith, has his throat slit after a whimsical evening with Connie in her garden house. Connie has been having severe nightmares and is unsure if she is the killer. Zukie Richardson's doubts about Connie's sanity come just in time. The socially ambitious wife of wealthy Howard is challenging her for the chairmanship of the Frobisher Night Committee. She wants to turn the village charity ball into a glamorous event for the region. Barnaby and Jones get caught in a tangle of sexual stalking, vicious rivalries and envy during their murder investigation. (Text: ZDF)

For a long time, Barnaby has had Causton Mayor David Hicks in his sights - for fraud, advantage-taking, and lucrative deals that cost the municipality dearly. When Hicks travels to the twin city of Brighton with councillors and interested citizens, the Inspector senses crooked dealings again and goes along for the ride. Also along for the ride is the universally hated property developer Hugh Dagleish. For fun, Hugh gets on a ghost train on the seafront and comes out with his head cut off. The murder investigation is taken up by Brighton's chief inspector, Tom's cousin John Barnaby. Back in Midsomer Parva, hotel and boutique owner Jenny Russell is decapitated in the same way. There is, after all, a prime suspect for this murder, Jenny's husband, whom she had thrown out of the house and business for notorious infidelity. He climbed into Jenny's bedroom on the night of the murder to steal jewelry and cash. But both Barnabys are skeptical. They'd rather look for a connection to the mayor's fraudulent deals. But there are also leads to Lady Matilda William, who is clearly spinning a web of lies around the accident that left her son Richard in a wheelchair. Why, in fact? (Text: ZDF)

In Milton Cross two years ago, tailor Gerald Woodley succumbed to a heart attack while gardening. Now his widow Sonia is slain on her way to confession. A little later, her confessor, Reverend Moreland, also has his throat cut. Almost the whole place belongs to Lord Edward Milton; manor house, church, several farms with fields belong to him. He prevents Luke and Matthew, the dead Gerald's son and brother, from turning in young Gary Soper for shoplifting. After all, Gary's mother Katie often helps the Woodleys out with their sewing. He advises Barnaby not to listen to the nasty gossip about Gerald. He didn't beat his Sonia, he says, but was a highly respectable citizen and Christian. A do-gooder? Barnaby senses that some of the villagers are keeping quiet about what they know about the landlord. It is only just before a third murder of the farmer's wife Katie Soper that the investigators manage to wrest the village's secrets. After that, they don't immediately turn their backs on Milton Cross. They flirt with a bespoke suit, handmade by Woodley & Woodley. (Text: ZDF)

For years, farmers Silas Burbadge and father and son Fincher have been fighting over a piece of land called The Swamp. Dan Malko wants to buy it so he and his traveling commune can settle on it, and the dispute takes on deadly proportions: An unknown man murders the Finchers, their lawyer, and the farm manager. Since all the murders are modeled on the mores of the Wild West, Barnaby and Jones search for their killer among the participants in the Western Festival currently taking place at Ford Florey. In the showdown, Barnaby, Jones and widow Susan Fincher find themselves in mortal danger. (Text: edel:Motion)

Picture + Sound: Not only in terms of content, but also on an audiovisual level, the four new episodes offer no major surprises: So there are again in the darker scenes isolated small blurs and slight image noise, but overall the picture quality is especially in the brighter outdoor scenes in terms of sharpness, color and contrast matching on a good TV level. The stereo sound is still quite pleasantly lively from the fact that the very centrally mixed dialogue and music dominate the action. For a TV production, this is quite sufficient and therefore still deserves a satisfied: good!

Extras: Except for trailers, there is unfortunately no bonus material.

Conclusion:Inspector Barnaby is slowly but surely also in Germany approaching the inevitable turning point at which John Nettles has left the series. But until it is so far, there are still a few episodes in the usual Midsomer manner, in which Nettles as Tom Barnaby together with his colleague DS Ben Jones tries to put a stop to the murderous goings-on in the county. The four new cases are of varying quality, but overall, the fans are again offered in the 19th DVD box exactly what they can expect from their favorite series: a lot of British humor, slightly quirky characters, unusual murder cases and also a little bit of suspense of the dignified kind - as always very British and very worth watching!