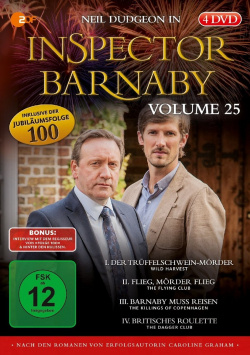 Content: Anniversary in Midsomer! You'd actually like to think that in a small, tranquil county like this, only minor crimes would be committed from time to time. Far from it! Over the last 19 years there have been murders and intrigues galore, 81 of which were solved by DCI Tom Barnaby before he was succeeded by his eldest cousin John Barnaby (Neil Dudgeon). He now has the great honour of solving the 100th case in Midsomer. In addition to the anniversary, which also takes Barnaby to Belgium for the first time, the 25th DVD box set has two more episodes from season 16, as well as the first episode of season 17 to offer.

Admittedly, since the departure of John Nettles from the popular series, Inspector Barnaby has lost a little of its charm. True, Neil Dudgeon is a fine replacement, believably embodying both dry wit and a certain authority. But even he just can't hide the fact that after all these years the series is too much on well-trodden paths and there are hardly any surprises left. The 100th episode tries through the visit to Copenhagen and the two Danish guest stars Brigitte Hjort S&oslash;rensen (Borgen, Pitch Perfect 2) and Ann Eleonora J&oslash;rgensen (Commissioner Lund) to the anniversary to let a little bit of fresh wind blow through Midsomer. But this only succeeds to a limited extent, as the actual case is simply too conventional.

Which is not to say that the series can't still entertain well after 100 episodes. When murders are committed in gourmet kitchens or by stunt pilots, John Barnaby's very special investigative methods certainly ensure that viewers still have a lot of fun with the leisurely murder hunt in the idyllic county. Gwilym Lee as DS Charlie Nelson has not yet fully stepped out of the shadow of his popular predecessor Jason Hughes. But you can tell that the two investigators are slowly but surely developing a coherent chemistry that the somewhat dusty series can definitely benefit from.

Overall, then, while these four new cases are certainly not among the best and most exciting to come out of Midsomer on our screens in the last two decades. But if you love the series and can't get enough of the sometimes delightfully quirky characters, the inventive murder scenarios and the entertaining investigations, you shouldn't miss this proud anniversary.

And that's what the new episodes on the anniversary DVD are all about:

The wealthy farmer, Martin Strickland, is found dead in the woods, mauled by wild boar. His widow tells of his anger over stolen truffles from his woods and is beside herself with rage when Martin's daughter, Amy, turns out to be the sole heir. The investigation leads John Barnaby and Charlie Nelson to the posh restaurant Wyvern House, where Amy works as a sous chef. When Amy is poisoned in the restaurant's kitchen, it is initially unclear whether the attack was on her or the tyrannical owner, Ruth Cameron. Barnaby plunges deep into a maelstrom of dashed love hopes and ambitious intrigue.

Bernard King, the owner of Finchmere Airfield, is dropped dead from a plane. Astonished, Barnaby and Nelson enter the world of stunt fliers and aviation heroes and discover bad things. There's an aggressive citizens' initiative against the airport and its noise. But even more mysterious are the traces of events and affairs from the time of the Second World War. Conflicts erupt at the great air show, which eventually lead Barnaby to a solution.

Eric Calder, the manager of Calder's Biscuits in Badger's Drift, is murdered while on a business trip in Copenhagen - poisoned by a strychnine-infused biscuit tin.
As this originates from Midsomer, Danish investigators, DCI Birgitte Poulsen and DS Anna Degn, ask Barnaby and Nelson for help. Apparently Eric Calder was connected to Copenhagen in more ways than just the biscuit business. But who knew the truth about his double life, and who would walk over dead bodies to protect those secrets?

The discovery of an unpublished novel by the late writer George Summersbee was to be announced during the Luxton Deeping Crime Festival. But then the manuscript is stolen and his executor dies a gruesome death: A booby-trapped roulette table electrocutes her fatally. To find the killer, Barnaby must untangle a web of jealousy and obsession. Will the newly minted father succeed?

Picture + Sound: Everything remains the same here: Sharpness, coloration and contrast matching are at a good TV level in the brighter scenes, with only minor blurring and slight image noise in darker moments. The stereo sound is absolutely convincing with the powerful and well understandable mixed dialogue and the well-matched music. Good.

Extras: To celebrate the anniversary, the third disc features an interview with the director of the 100th episode (approx. 16:24 min.), as well as a short featurette in which the Danish guest stars talk about Barnaby (approx. 2:29 min.).

Conclusion: Inspector Barnaby celebrates its anniversary! In the now 25th DVD box set, there is the now 100th episode of the long-running hit to see, along with three more cases from the murderous county of Midsomer. Even if the very special charm of the earlier cases has disappeared a little, the series is still a lot of fun in its very special way. The technical realization of the four episodes is on a good level and for the anniversary there are even two extras. All in all, fans should not miss this box. Recommendable