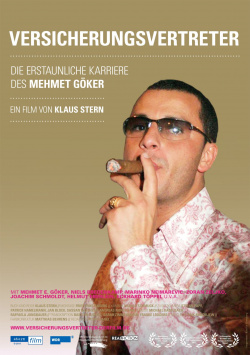 It sounds like a story from a movie: at 22, Mehmet Göker still lives in the nondescript apartment building with his parents, founds his first company from his nursery, becomes a millionaire in no time, and is already facing insolvency again at 32, 21 million euros in debt. The ten years in between are a fascinating success story, which filmmaker Klaus Stern now traces in his documentary Insurance Agent. With the help of company videos, footage from a private broadcaster, mobile phone videos and, finally, footage shot by Stern himself, the film not only creates a multi-layered portrait of a man guided by his thirst for a career, but also a sometimes frightening insight into the machinations of the insurance industry.

With his company MEG, which Göker of course named after himself, the trained insurance salesman has in a short time turned his dream of getting more than a crumb of the pie into reality. Selling private health insurance has earned him his first million by the time he is 25, and new employees are being hired, lucrative commissions are being paid, and other amenities are being handed out to successful employees. But Göker knows that he can't just use the carrot to get his sheep into the dry, but that he also has to use the stick when necessary. The tone is sometimes louder and enormous pressure is built up, which not all subordinates can withstand.

Since 2006 Stern has been dealing with the subject of MEG and Mehmet Göker, has collected materials, interviewed former employees and also got Göker himself in front of the camera. The result is a documentary that sometimes leaves the viewer shaking his head. Stern does without off-camera commentary or explanatory captions. He wants to let the pictures speak for themselves. And when one can observe, for example, the self-congratulation at large company parties, where then also an eternal pledge of allegiance between the boss and his most successful employees in the form of a marriage proposal-like Fremdschämaktion is demanded, or in a peer pressure situation MEG tattoos are stung, further comments are also completely unnecessary.

However, insurance agent is not a pure attack on the person Göker. There are very critical voices, especially from former employees, and in many moments the businessman seems extremely unpleasant. But you have to give him credit for knowing exactly what he is doing and, above all, standing fully behind everything he does. And he also faces his critics. For example, he was present at a first screening of the documentary and answered the not always pleasant questions of the audience afterwards. Again and again it became clear there, as well as in the film, how Göker wins people over with his manner and is able to convince them of his approach and his goals. To criticize a person like him is very easy. But fortunately Stern has not made it so easy and has dealt more deeply with the whole story and the person Göker, so that he can not be accused of one-sidedness.

Whether you have to see Insurance Agents in the cinema is open to question. But for those interested in documentaries that entertain while at the same time heating up tempers, a look at the rise and fall (and rise again) of Mehmet Göker can definitely be recommended.