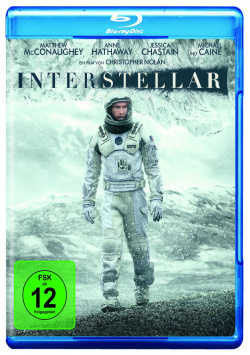 Film: Christopher Nolan has once again directed some very great cinema with his latest film Interstellar. For me as a film lover, the latest child from the Inception and Dark Knight director is a true feast. For me as a film critic, on the other hand, it proves to be a real challenge. After all, how can you write about a film that has the most intense impact when the audience knows as little as possible about the plot and themes covered in the film beforehand? Minor spoilers, despite all efforts, unfortunately cannot be avoided unless I were to end the review at this point. But, of course, the significant twists will not be revealed here, and some aspects of the story will only be assessed in hints.

The story of Interstellar takes place in a not-too-distant future where Earth's natural resources have been depleted and mankind faces its impending extinction. After the death of his wife, former pilot Cooper (Matthew McConaughey) is a farmer trying to give his two children Murph (Mackenzie Foy) and Tom (Timothée Chalamet) some semblance of hope for a better future. But he must realize that this hope is unfounded. So he joins an extremely risky and top-secret NASA research project to search for a new home for humanity on the other side of a wormhole. It's a journey into the unknown that could take a few years or decades. In the worst case scenario, Cooper would never return to Earth and never see his children again. But as long as there is a chance that humanity can continue and Murph and Tom have a future, he is willing to take the risk. But what awaits him beyond our galaxy runs counter to all his expectations...

That, in broad strokes, is the initial situation of Interstellar, set up in about the first 45 minutes of its nearly 3 hour running time. In this part of the film, Nolan also relies more heavily on a mixture of scientifically verified realism and very human emotionality. With his usual fascinating imagery and a very spherical soundtrack by Hans Zimmer, who here relies more on organ sounds, Nolan creates a very special atmosphere that is hard to resist. And even if it can already be suspected here that the father-daughter story threatens to drift a little into the kitschy, there is no doubt in the first third that Nolan has created another masterpiece here.

This impression is reinforced as soon as Cooper and his research crew cross the wormhole. The imagery that Nolan and his team have brought to the screen here is simply mesmerizing, and you literally want to lose yourself in this excursion into an alien galaxy. But even when the action shifts back to Earth and follows Cooper's now grown children, portrayed by Jessica Chastain and Casey Affleck, the story and its visuals remain gripping, moving and fascinating. However, here it is already increasingly difficult to follow the scientific explanations. At this point at the latest, viewers should simply let themselves be carried along by the emotional side of the story and not question the rest too much. Because that could significantly diminish the further enjoyment of Interstellar.

Because more and more it becomes clear that love is the central theme of the film. Sure, there are some great special effects, some extremely exciting and also action-packed moments, and a lot of scientific babble. But in the end, it's all about love, with Cooper's for his children, and especially Murph, naturally taking center stage. Nolan therefore also takes a lot of time for quiet, emotional moments that stand in stark contrast to the action overkill of The Dark Knight Rises. In the finale, the whole thing threatens to overshoot the mark a bit, and viewers who were expecting a lot of action and for whom emotional cinema is sheer horror might find little to like in the final act. But if you're into what Nolan is trying to tell here and also let yourself fall emotionally, you'll probably be very moved by this film by the end, as I was.

Sure, Interstellar is not a perfect film. At times the music is mixed a bit too intrusive, there are also small lengths towards the end and the mixture of poignant emotional cinema and the usual for Nolan claim of a certain anchoring in reality only works to a certain extent, especially in the last third. Nevertheless, the film is a great experience on several levels. Visually, Interstellar is a masterpiece that still works very well on the TV screen. The story is just very, very beautiful and the actors quite outstanding. In the end, the film really only suffers from audience expectation, as many expected nothing less than another groundbreaking milestone of modern cinema from Nolan after Inception or Dark Knight. And as great as Interstellar is, the work has just not become such a milestone. Therefore, if you can lower your expectations a bit and get into emotional cinema, you will get one of the most impressive viewing experiences of the last months. Absolutely worth seeing!!!

Picture + Sound: The technical implementation of the Blu-Ray is, as could be expected, on quite a high level. The very clean picture has a very good overall sharpness, a pleasant depth and coherently mixed black levels, through which hardly any details are swallowed even in the numerous darker scenes. The fact that the contrasts in some scenes seem a bit washed out is a deliberately used stylistic device, which should therefore not be judged negatively. The change of the picture format between the normal and the sequences shot in IMAX format runs quite seamlessly and thus underlines the very positive overall impression of the picture quality.

Just as much fun as the visuals is the sound, which transports the numerous surround effects excellently into the home theater. The dialogue is mixed very powerfully and well intelligible in most moments. That the music overlays the action in some scenes, is also again deliberately chosen by Nolan and provides Very good!

Extras: In the bonus material, the interested viewer is offered on the second disc the full program. Starting here is the 50-minute documentary The Science of Interstellar, which focuses on astrophysicist Kip Thorne, who was a consultant and producer on the film. Here Thorne explains the scientific background on which the story is based. A highly interesting and entertaining documentary that could have happily been a little longer.

Continue with the Inside Interstellar section. Here, 14 featurettes with a total running time of just over two hours offer a comprehensive look at the conception, making and post-production of the film. From the music to the sets, the design, the mix of miniatures and computer effects, the simulation of weightlessness to the design of the robots or the creation of a dust storm, almost all aspects of the production are analyzed here using interviews, photos and footage from the shooting. The only shortcoming of these very watchable making-of featurettes is the lack of a Play All function.

Finally, the disc has the teaser and three trailers for the film to offer. Very good!

Conclusion: Interstellar is also great cinema on Blu-ray. For those who can engage with the story and its message, this is truly wonderful fodder for the eyes, the mind and the heart. The Blu-ray presents the film in convincing picture and sound quality and also has a lot of worth seeing and informative extras to offer on a second disc. For this there is also a more than deserved: Absolutely recommendable!