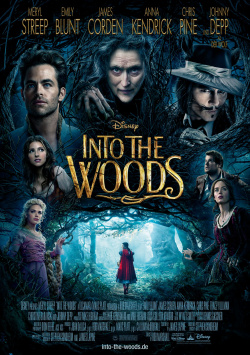 A simple baker (James Corden) and his wife (Emily Blunt) want nothing more than to finally have a child. But many years ago, a witch (Meryl Streep) placed a curse on the baker's family. In order to banish it, the couple would have to get the old witch some important ingredients for a magical potion. To do so, they must delve deep into the woods surrounding their village, where they encounter Little Red Riding Hood, Rapunzel, Cinderella and many a fairy tale character. But just as they approach the point where it is usually said And they lived happily ever after, events take an unexpected, dark turn.

The Broadway musical Into the Woods by Stephen Sondheim weaves various fairy tales - from Cinderella to Hans and the Beanstalk to Rapunzel and Little Red Riding Hood - into a quirky, blackly humorous whole in a very amusing way. The musical ran for nearly 800 performances on Broadway during its initial run and won several Tony Awards. Rob Marshall, who has already transported musical hits from the stage to the screen with Chicago and Nine, now ventures into the difficult undertaking of also turning Into the Woods into a movie musical suitable for the masses. To do so, he has assembled a truly magnificent cast: Meryl Streep as the witch, Johnny Depp as the bad wolf, Anna Kendrick as Cinderella or Chris Pine as the self-absorbed prince get to show off their acting and singing talents.

Although the story would have had the potential for that, Marshall has resisted the temptation to spice up the musical with big special effects. While there are some very successful computer effects, most of the time the actors are acting on atmospheric sets, some of which reflect the stage feel of the musical very well. Big events like Jack's visit to the land of the giants take place in secret and are only told to the audience in the songs. Which brings us to the central topic: the songs! Those who watch Into the Woods must be aware that this is not a film with a few vocal interludes, but that there is singing, sometimes more, sometimes less, in about 90 percent of the two-hour-plus running time. Since Stephen Sondheim's tunes aren't exactly known for their catchiness, this can be extremely taxing on non-musical fans.

In addition, it must also be clear that despite the fairy tale theme, this is not a children's film. Although the film adaptation has been toned down a bit compared to the stage version, things are still very dark here, especially in the second half. The humour is occasionally very nasty and some scenes could well be a wee bit disturbing to young viewers. But if you are aware of all this and can get involved with the music, you will definitely have a lot of fun with this weird ride through the fairy tale world. The songs, presented in the original English with German subtitles, are full of delightful wordplay and the acting of the cast is filled with wonderful self-irony. The vocal duel between the two vain princes, for example, is so affectedly performed that it's hard not to burst out laughing.

Like so many other musical adaptations, Into the Woods will have a hard time appealing to a wide audience in Germany. But if you already enjoyed Sweeney Todd and were captivated by Les Miserables, you'll have a fabulously good time at the movies here, too. Alone for the good-humored and pleasantly self-deprecating ensemble, as well as the great set, there is then also a smashing: Worth seeing!