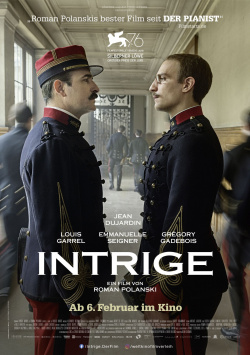 France, January 1895: Jewish officer Alfred Dreyfus (Louis Garrel) is publicly demoted and exiled for life to Devil's Island in the Atlantic. Marie-Georges Picquart (Jean Dujardin), who knew Dreyfus personally and was present at his humiliating demotion, is promoted a short time later to head of intelligence in the very department that exposed Dreyfus' treachery. But when secrets continue to be betrayed to the Germans even after his conviction, doubts begin to germinate in Picquart's mind about the young officer's guilt. Doubts that he expresses to his superiors - but they give him unmistakable instructions to let the case rest. Nevertheless, Picquart investigates further and uncovers machinations that could be life-threatening for him.

With Intrigue, Roman Polanski turns his attention to one of the greatest political scandals of the late 19th century. Based on the best-selling book by Robert Harris, Polanski catapults his protagonist into a web of anti-Semitism, power and cover-up that has a chilling relevance at various points. The historical drama is superbly cast, with Oscar-winner Jean Dujardin proving once again that he can convincingly embody more than just comic roles. The set and camerawork are also excellent, making this award-winning film a rousing experience.

However, the production does test the audience, especially in the first 30 minutes of the well over two-hour running time. The first act is very sluggishly told, making it extremely difficult to engage with the story. But little by little the atmosphere gets more and more oppressive and the tension picks up visibly. Of course, the action is still mainly determined by dialogues. But when it becomes clear what extent the whole thing takes on, then you just have to root for it - even if you are so well versed in history that you already know the outcome. Polanski once again proves to be a master of his craft. No wonder this film won the Grand Jury Prize at the 2019 Venice Film Festival.

Intrigue is a film about guilt, conscience and truth - questions that are always relevant. Even though the story is set over a hundred years ago, it never feels antiquated, but extremely contemporary - something that is definitely still worth commenting on with a sorry. Overall, Roman Polanski has succeeded in a gripping historical drama after a tough beginning, which can score points in addition to the story based on true events with great actors and a very authentic-looking production. Absolutely worth seeing!

Cinema trailer for the movie "Intrigue (Frankreich 2019)"
Loading the player ...