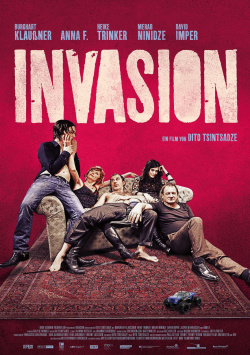 Since the accidental death of his son and the suicide of his wife, widower Josef (Burghart Klaußner) has been living alone and completely withdrawn in his villa in the middle of nowhere, which is far too big for him. During one of his regular visits to the cemetery, he one day meets Nina (Heike Trinker), a stranger to him, who introduces herself as his wife's cousin. Although Josef cannot remember Nina, he finds in her a welcome interlocutor to whom he can reveal his deeply buried emotions. Josef also quickly befriends her son Simon (David Imper). And so it is a matter of course for him to offer the young man to move into the villa with his wife Milena (Anna F.) and his son when he learns that the small family has to live in an apartment that is far too small. When Nina's friend Konstantin (Merab Ninidze) shows up, the widower's life is finally given a new lease of life. But what begins as a welcome change soon takes on unpleasant characteristics and Josef wants nothing more than to get rid of his guests again. But that is easier said than done.

Invasion begins like a typical German drama. A lot of dreariness and a gloomy basic mood determine the first minutes. But Dito Tsintsadze has quite a few aces up his sleeve, which he pulls again and again in the course of his story to surprise or mislead the audience. Thus, the film sometimes seems like a black comedy, then again like a tangible psychological thriller or a disturbing family drama. The viewer is initially captivated by the atmosphere built up by the camerawork and location, but it is only through the various twists and turns and the underlying tension that he remains riveted to the end.

The ensemble of actors, led confidently by Burghart Klaußner, transports the multi-layered script very well to the screen, with Merab Ninidze and Anna F. in particular leaving a lasting impression. In the end, the perfectly harmonizing elements of the production, from script to camera, actors and music, ensure that Invasion has become a surprising little arthouse cinema gem that friends of sophisticated German arthouse cinema should not miss. Worth seeing

Cinema trailer for the movie "Invasion (Deutschland 2012)"
Loading the player ...