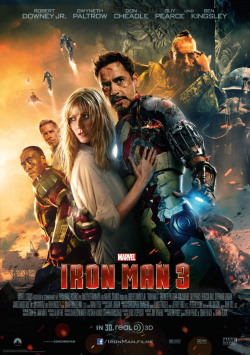 After joining the rest of the Avengers in saving New York and the rest of the world from an alien invasion, and even being willing to sacrifice his own life to do so, Tony Stark (Robert Downey Jr.) aka Iron Man has little time to rest. For as the first of the Avengers, he must now plunge into his own latest cinematic adventure. In the process, the events in New York and his brief visit beyond the wormhole have clearly left their mark on Stark. The usually cool and self-confident eccentric is repeatedly plagued by anxiety attacks, which he soon can no longer hide from his girlfriend Pepper (Gwyneth Paltrow). It doesn't help that Aldrich Kilian (Guy Pearce), a confidant from Pepper's past who still seems interested in her, shows up. But soon Tony Stark has completely different problems. In front of cameras, he provokes the globally wanted terrorist Mandarin (Ben Kingsley), who then launches a destructive attack against Iron Man. Suddenly Stark finds himself completely on his own against a seemingly superior enemy, unaware that things are very different from what they appear to be.

After two films in the director's chair, Jon Favreau has handed that seat over to Shane Black for Iron Man 3, settling for the role of supporting actor and producer. That decision is proving to be the best thing that could have happened to this franchise. Not that Favreau's first two films were bad. But Shane Black just brings a breath of fresh air to the Iron Man series that it desperately needed after the enormous success of the Avengers. Black isn't just a good writer, whose work on Lethal Weapon completely redefined the genre of buddy cop movies and left a lasting mark on it. He also rediscovered Robert Downey Jr.'s cool as the director of the wonderful crime comedy, reviving his career that had been thought dead. Whether it's in the comedic moments, or the more dramatic ones, Shane Black's script and direction always make perfect use of the lead actor's strengths. This is especially evident in the scenes between Stark and little Harley (Ty Simpkins). These moments could have easily come off as cheesy or overly cute. But Black's very special sense of humor, perfectly delivered by Downey Jr, makes these scenes a very special highlight of the film.

However, one actor actually manages to steal the show from Robert Downey Jr: Ben Kinsgley. He's just great as the mysterious terrorist Mandarin. At the beginning he seems a bit strange and over the top. But then a reveal follows that puts his performance in a whole new light and makes him the best character of this installment alongside Tony Stark. But also Guy Pearce, who first has to show up with nasty glasses and even nastier hairstyle, before he is allowed to be clearly more attractive, but also wonderfully sleazy and shady, enriches the world of Iron Man very positively.

The story itself is, of course, absolutely harebrained and far from any reality. However, this should not be judged negatively, because after all, this is a comic book adaptation. Quite the opposite: after aliens and other dimensions came into play in the Avengers, it is only consistent if fantastic elements are now more pronounced here too. And that the development of the characters was not forgotten and supporting characters such as Pepper, Stark's former bodyguard Happy Hogan or his buddy James Rhodes (Don Cheadle) is given a little more space, is just another strength of this on almost all levels very good film.

Only negative must be noted here only the 3D effect, which is barely noticeable in about 90% of the film and only has the effect of darkening the picture unnecessarily. The few moments in which the image gains depth or obvious 3D effects are recognizable, in no way justify the more expensive premium for a 3D performance. If you have a choice, you can safely forgo the 3D glasses, because you won't miss anything spectacular here if you opt for the 2D version.

Iron Man 3 is the perfect start to Phase 2 of the Avengers solo films. The fan is offered a mixture of furious action, biting humor and fantastic suspense that is not boring in any second.With great actors, killer effects and some real surprises, this movie offers best popcorn entertainment that continues even after the credits with a very amusing additional scene. Without question the best part of the series and a more than worthy Avengers successor. And therefore also applies: Absolutely worth seeing!