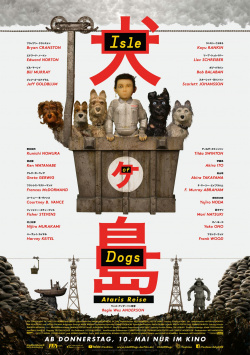 When a dog flu breaks out that could also be dangerous to humans, the corrupt Kobayashi, mayor of Megasaki City, issues a government decree banishing all the city's dogs to a huge landfill. Here, on Trash Island, the dogs now struggle to survive. Atari, the foster son of Kobayashi, sets out on a desperate search for his bodyguard dog, Spots, and ends up on Trash Island. With the help of a pack of mixed-breed dogs, he sets out to find Spots - and so begins an adventurous journey across the island for the boy and his new four-legged friends. It is a journey at the end of which the fate of all the dogs will be decided.

With Isle of Dogs - Atari's Journey, director Wes Anderson presents his second animated film shot in stop-motion. Set in a near future, the story is full of whimsical ideas and clear influences from Japanese film and comic book culture. But first and foremost, the film is one thing: a Wes Anderson film. You can see, hear and feel that in every second. For fans of the extraordinary filmmaker this is truly a feast, but for all other viewers it might take some getting used to. For Anderson's style is very particular, which makes him pleasantly stand out from the mainstream, but also makes him somewhat difficult to access for the masses.

And that's a real shame, especially in the case of this intelligent, endearing animated film, because it would have deserved quite a large audience if only for the incredibly intricate, detailed work of the animation team. The film has as many funny moments as it does touching ones, though the sledgehammer is never used. As much as the imagery is bursting with inventiveness, Anderson's style is restrained in all other aspects. But that's exactly what makes the laughs even heartier and the emotions even more intense.

The story itself is truly enchanting and works on two levels: for kids, the whole thing is simply a great, amusing adventure about a boy and lots of lovable dogs. For adults, there's also a somewhat socio-critical level that can definitely be thought-provoking. Apart from that, Isle of Dogs - Atari's Journey is one thing in particular: a feast for the eyes and the heart. A masterpiece of animation art and a fairy tale for the whole family. Therefore: Absolutely worth seeing - especially if you like e a little more special and just wonderfully different!