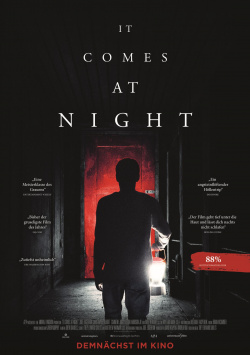 It Comes At Night

It actually happened: A deadly virus has taken almost all of humanity. Paul (Joel Edgerton), his wife Sarah (Carmen Ejego) and their 17-year-old son Travis (Kelvin Harrison Jr.) have managed to survive this horror. In the solitude of the woods, heavily armed, they have built a small refuge where they barely make ends meet. Paul would do anything to save his family - even if it means killing potentially infected people. But when a young couple (Riley Keough, Christopher Abbott) and their young son seek shelter with them, Paul is persuaded to take them in. But the initial willingness to help is increasingly driven away by paranoia and suspicion. And it's not long before Paul has to make a very dramatic decision.

It Comes At Night is a quiet, yet intense, end-times thriller that works so well precisely because it largely takes place in a very limited space. The audience is as unaware as the protagonists of what is happening outside the forest, how many survivors there are, and where dangers lurk everywhere. Director Trey Edward Shults shows how a family tries to hold together in the constant threat of lurking death. It's not just about pure survival, but also about not breaking down when your moral sensibilities are put to the test.

In doing so, the film asks some very basic questions about humanity, fears and guilt. Using very simple but effective means, the whole thing transforms more and more from drama to psycho-horror, with the horror taking place mainly in the minds of the audience, with a few minor exceptions - which again is due to the oppressive atmosphere that Shults does an excellent job of building. Even if there are small lengths and there is not really much happening, there is a thrilling tension from the beginning to the bitter end, which is also supported by the intense acting of the actors.

Particularly Joel Edgerton convinces as a desperate family man. His actions are absolutely understandable, at least at the beginning, and it pains you to watch how the fear and paranoia take hold of him more and more and influence his decisions. It Comes At Night is not a mainstream horror and definitely not a movie for genre lovers who like it bloody and brutal. However, if you appreciate horror of the psychological kind and like deep end-time thrillers, this is definitely not one to miss: Absolutely worth seeing!