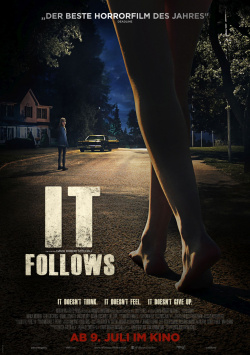 19-year-old Jay (Maika Monroe) is sure Hugh (Jake Weary) is the one. He's the one she wants to have sex with. A decision she soon bitterly regrets. Because after the romantic tête-à-tête in Hugh's car, she finds herself tied to a chair in an abandoned warehouse. Hugh seems distraught and starts saying jumbled stuff about something that will haunt Jay from now on. If she wants to get rid of it, she'll just have to sleep with SOMEONE. Although she thinks Hugh is just paranoid, Jay quickly realizes that she does indeed feel haunted, whether she's at home, at school, or out with her friends. And there seems to be no escape...

With It Follows, director David Robert Mitchell proves that horror can be original, suspenseful and involving even with extremely simple means. Mitchell dispenses almost entirely with gory effects (hence the not-quite-appropriate 12+ age rating), instead relying primarily on atmosphere. And it is so dark and tense that even the very slow pace of the story can't diminish the effect of the film. The viewer is infected by Jay's steadily growing paranoia and is thus drawn deeper and deeper into the nightmarish production.

The characters Mitchell has designed in his script are not the typical horror movie teenagers, but almost seem like authentic people. The camera, sound, and effects are also so unlike anything you've seen in the horror subject matter of late, which is primarily geared towards a teen audience. It Follows is an indie production in the best sense of the word, which is able to achieve the maximum chilling effect by completely reducing the means used to the essentials. Influences from early John Carpenter, for example, can be clearly felt in the music as well as in the omnipresent ominous atmosphere. Nevertheless, the film does not seem like a Carpenter clone or a cheap copy, but leaves a surprising and refreshingly unused overall impression.

For whom horror consists of crude splatter scenes, masked killers and copulating party teens, the It Follows will be only partly friendly. If, on the other hand, you appreciate subtle horror and would rather get goosebumps from the atmosphere than from gallons of film blood, then you should definitely not miss this little genre gem. Absolutely worth seeing!