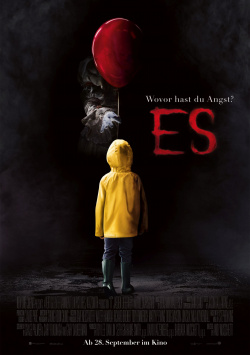 The small town of Derry, Maine in the 1980s: the idyllic facade of the small town is shaken to its foundations when some children disappear. It is not mysterious misfortune is haunted. Evil crawls from the depths of the sewers again every 27 years to haunt the town's children. But this time, It (Bill Skarsg&aring;rd) doesn't have such an easy time of it. For seven friends, all misfits who call themselves the Losers Club, join forces to face the evil that appears to them in the form of Pennywise the clown. But to defeat It, the kids would first have to face their deepest fears.

One thing perhaps to start with: I have been a huge fan of Stephen King's books since I was a teenager. I have read everything King has written with a few exceptions. Some of his works I have even picked up several times. And It is undoubtedly one of them, being my personal King favorite after The Stand. Because of my fondness for these books and my passion for cinema, I am of course always excited when a new King adaptation is announced, always hoping that it was able to capture the spirit of the original. For while there have been some truly great adaptations of stories by the horror master, such as The Shawshank Redemption, Stand by Me, The Green Mile and The Shining. But on the other hand, many films that make use of Stephen King's oeuvre are also just plain rubbish.

It was filmed for American television as a two-parter back in 1990. Even though Tim Curry was really great as Pennywise and director Tommy Lee Wallace did a good job of adapting some elements of the book, the limitations imposed by the TV format alone prevented this adaptation from even coming close to the book. True Detective mastermind Cary Fukunaga wanted to change that with his two-part theatrical version. But after an intense planning period, Fukunaga left the project (or was fired), which is generally not a good sign. Taking over for him was Andy Muschietti, who scored a surprise hit in 2013 with the horror film Mama.

He stuck to the concept that this cinematic version of It would be told in two parts. The first chapter will recount the events of The Loser's Club, then Part 2 will send them off to fight Pennywise 27 years later as adults. The fact that the events don't take place in the 1960s like in the book, but at the end of the 80s, doesn't bother at all, especially since the makers managed to give the movie a coherent 80s feeling on the one hand, but at the same time make it seem very timeless. The friendship of the seven kids seems absolutely genuine, their conversations absolutely authentic and their fears universally understandable.

The child actors are really great, and it's already clear that their adult counterparts are going to have a hard time capturing that very special chemistry between the friends as believably as the young actors have managed to do. But the real star of the film is, of course, clown Pennywise, wonderfully terrifyingly embodied by Bill Skarsg&aring;rd. With his demonic grin that he used to tease his younger brother with as a child, the Swedish-born actor provides some perfect shock moments. Here, the sound effects could have been used a bit more discreetly. Because it doesn't really need them at all to get scared or scared of Pennywise.

Besides the overly intrusive sound effects, the use of CGI is also not entirely convincing in some places. But that's complaining on a high level. Because, with a few minor quibbles, It is an all-around successful adaptation of part of the book and is already one of the best Stephen King film adaptations ever. It's a horror film that offers good shock moments, but also tells a stirring story about the loss of innocence and the power of true friendship. We're already looking forward to 2019 when part 2 is due to hit cinemas. Absolutely worth seeing - but not for the faint of heart!