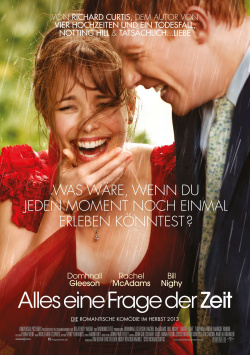 All a Matter of Time

Once again, a year has come to an end without 21-year-old Tim Lake (Domhnall Gleeson) finally having any luck with the opposite sex. But then the shy boy learns a family secret from his father (Bill Nighy) that could not only end his bachelorhood, but turn his entire life completely upside down: all the men in his family have the ability to travel back in time within their respective lifespans. This doesn't require a time machine, but simply a dark, quiet place to focus on the point in time to which they wish to travel back. Although Tim can't land on his first great love even with this ability, time travel proves to be extremely helpful to him time and time again. When he meets and falls in love with the enchanting Mary (Rachel McAdams) after moving to London, however, he must also learn that this ability does not only bring advantages. For when he helps his landlord, playwright Harry (Tom Hollander), prevent a disastrous mishap at the premiere of his new play, it prevents his first meeting with Mary. Worse - she's actually fallen for another guy. But Tim doesn't let that defeat him. Mary is the love of his life and he's going to make her fall in love with him too - it's all just a matter of time.

Whether as the writer of films such as Notting Hill or Four Weddings and a Funeral and as the director of Actually.Love, Richard Curtis has always been perfect at spicing up uninhibitedly sentimental romance with wonderfully British humour of a particularly dry kind, while creating endearingly quirky characters. These strengths also characterize his latest romantic comedy All a Matter of Time, which has once again become an extremely charming, funny and at the same time extremely heartfelt work.

Borne this very special journey through time by a coherently selected ensemble of actors up to small supporting roles, which can convince with good-humored and very charming performances. Although Domhnall Gleeson may not look like the typical romantic cinema hero at first glance, he quickly proves to be the perfect casting for the somewhat awkward but extremely lovable Tim. When Tim, after learning of his time-traveling ability, unsuccessfully tries everything to win the heart of the beautiful Charlotte (Margot Robbie), he succeeds, at least with the audience. It also helps that not only is there perfect rapport between him and the time-travel-savvy Rachel McAdams (The Time Traveler's Wife), but also that between Gleeson and the once again wonderful Bill Nighy. For All a Matter of Time is not only a very beautiful love story, but also a heartwarming father-son tale that could well bring tears to some viewers' eyes by the end.

Richard Curtis' signature is unmistakable throughout almost the entire film. From the choice of soundtrack to a montage that summarizes several months, strongly reminiscent of a scene from Notting Hill, to the final minute, stylistically reminiscent of the end of Tatsächlich.Liebe, all this is just typical Curtis. But the fact that the author and filmmaker doesn't really reinvent himself here is anything but negative. Because Curtis is simply a master of his craft and as long as in the end a movie like this comes out, he can continue to copy himself again and again.

Because whether it's the wonderful drawing of the characters (Tom Hollander's eccentric playwright Harry, for instance, is just great), the wordplay that still works well even in the German dubbing, or the imagery marked by an uninhibited sentimentality, Curtis simply succeeds perfectly in whisking the viewer away for two hours from the grey everyday life into a fairytale world that somehow feels real despite all the over-stylization. All a Matter of Time is not a film for cynics or for viewers who value extreme realism. It is pure escapism for all uninhibited romantics and a must-see for all fans of Tatsächlich.Liebe. And in the end, I'm sure many other viewers will feel the same way I did: you'll want to retreat to a dark place after the credits roll, focus on the beginning of the film to travel there, just so you can watch the whole thing again right away. Absolutely worth seeing!

Cinema trailer for the movie "All a Matter of Time (Großbritannien 2013)"
Loading the player ...