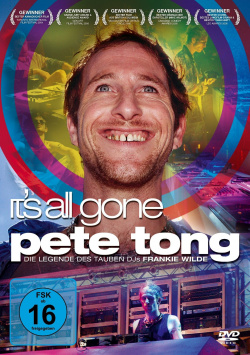 Content: Frankie Wilde (Paul Kaye) has made it: as the most successful DJ on party island Ibiza he has fame, money, a sexy model woman (Kate Magwan) and a dream villa. And Frankie knows how to savor such success: Parties, sex, drugs - he takes everything he can get. But of course this does not remain without consequences forever. Because the loud music, the constant stress and the many drugs put his hearing to such an extent that he threatens to lose it completely. And since Frankie ignores all warning signals, it's too late at some point to stop this development. Bad enough that the DJ can't do his job anymore and falls psychically into a deep hole. Now, of all times, he is abandoned by his wife and fired by his record company. When Frankie lies on the ground, he finds the strength to finally renounce the drugs. Trying to get his life back under control by learning to read his lips, he meets Penelope (Beatriz Batarda), also deaf, with whom he quickly falls in love. At her side he not only finds new courage and happiness, but also his love for hammering beats. But as a deaf DJ he can also continue old successes?

"It`s all gone Pete Tong" is a successful mixture of drama and comedy, which gets a light mockumentary touch through interviews with real DJ greats like Paul van Dyk or Tiësto. It's precisely these seemingly documentary insertions that give the film, which is supposed to have been inspired by true events, a certain closeness to reality, which offers a good counterbalance to Frankie's completely bizarre drug trips. Because when the DJ here is completely stoned to death by an oversized skunk or indulges in his slogan "Fuck & Party" in shrill camera rides, it seems very artificial in a very weird way. However, when the viewer is brought back to the ground after such rather confusing moments, then the overall picture works out really well.

Paul Kaye ("Game of Thrones", "Match Point") is in top form especially in the scenes in which Frankie has to learn to cope with his sudden deafness. Even though he already delivers a convincing performance as a grandspur party stallion, it's only in the second half of the movie that Kaye's play lends the character a certain depth, which makes him a real person to be sympathized with by the viewer. This impression is reinforced by the good interplay with the charming Beatriz Batarda.

Since the film was shot at some of Ibiza's well-known locations and much of the music from the local party temples was also used, "It`s all gone Pete Tong" quickly became a true cult film, especially for the Ibiza generation. Ten years after its premiere, the film is finally being released on DVD in Germany. Viewers who insist on dubbing have to bite the bullet, as only the original English version with German subtitles is published here. But in the end nothing better could have happened to the movie, because a dubbing - no matter how successful it would have been - would have destroyed much of the flair and a lot of humor.

"It`s all gone Pete Tong" is certainly not a movie for the masses. The whole thing is simply too special and too slanted for that. But if you love music films of a different kind, appreciate bizarre humour and want to experience a thrilling story accompanied by rich beats, you should definitely buy this DVD. Worth seeing!

Picture + sound: The picture on the DVD is clean, but there are small weaknesses in the sharpness of the picture here and there. The colour scheme, on the other hand, is powerful and works really well, especially in the party scenes. The sound is only available in the English original (with German subtitles), whereby here the more powerful Dolby Digital 5.1 mix is clearly preferable to the stereo track, which is also available, especially in the scenes in which the music sets the tone. Good!

Extras: As a bonus the DVD has interesting interviews with lead actor Paul Kaye (ca. 4:28 min.), director Mike Dowse (ca. 7:17 min.), as well as the two producers Allan Niblo and James Richardson (ca. 9:32 min.) to offer. In addition there are short insights on the shooting of the scene with the pool cover (approx. 2:19 min.) and the work with the club statists (approx. 2:18 min.).

Result: "It`s all gone Pete Tong" is a successful mixture of drama, comedy and mockumentary, which tells of the deep fall and radiant comeback of the fictitious DJ legend Frankie Wilde, accompanied by interview contributions of real DJ greats. The story of the deaf DJ is told in a colourful, shrill, cynical, bizarre and very original way. The film, which now enjoys cult status, will be released on DVD for the first time in Germany on the occasion of its 10th anniversary, in its original English version with German subtitles. The technical implementation is good, the bonus material scarce, but worth seeing. Altogether there is a clear one here: Recommendable!