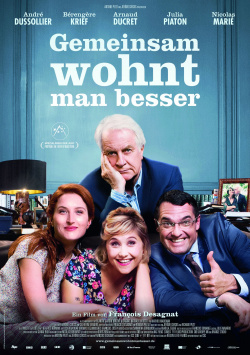 Living together is better

Since the death of his beloved wife, widower Hubert Jacquin (Andr&eacute; Dussollier) has lived in complete seclusion in his large old Parisian apartment. Hubert just wants to be alone - only a cleaning lady would he let into his apartment. Believing that the young Manuela (B&eacute;reng&egrave;re Krief) wants to apply for this very job, he shows the lively student his apartment. However, she is only looking for a room and can't believe her luck. But the joy lasts only a few moments, until Hubert recognizes the misunderstanding and he puts the young woman back on the street. But after meeting her again, the solitary man is persuaded to let Manuela stay with him. What's more, she convinces him to turn the large apartment into a shared flat and take in two more flatmates. And so suddenly Hubert is also living with nurse Marion (Julia Piaton) and neurotic lawyer Paul-G&eacute;rard (Arnaud Ducret). And although the four couldn't be more different, the widower soon realizes: it's simply better to live together!

Together you live better leaves mixed feelings. The film has many wonderful and extremely funny moments. And these are also clearly in the majority. But in the end it's not enough for an all-around positive overall impression. Because there are a few scenes that are so over-the-top silly that they just don't work and want to fit into the otherwise charming production. Andr&eacute; Dussollier, best known from films like The Fabulous World of Am&eacute;lie or the comedy classic Three Men and a Baby, is great as a grumpy retiree who really just wants to be left alone. Comedienne B&eacute;reng&egrave;re Krief is the perfect foil as a chaotic bundle of energy, even if her frantic acting risks getting on the audience's nerves a bit, especially at the beginning. But just as the Manuela Hubert she plays gradually grows on the audience, she also succeeds in doing so, something the film can definitely benefit from, especially in the second half.

Julia Piaton and Arnaud Ducret complete the WG very well, so that you enjoy spending time with the motley bunch as a viewer - even when things get a bit too silly. It's just a shame that the film's humor comes across so unbalanced. Some scenes offer such wonderful situational comedy and some of the dialogues are really funny, so there really wasn't a need for the overdone slapstick that is unpacked here in places. The fact that the film is still bearable even in these weak moments and does not completely crash, is thanks to the good and very charming actors, who can turn the tide here again and again in time.

So Together you live better with a few small dropouts but still joins the ranks of the beautiful feel-good comedies that have made it from France to Germany in recent months. If you like likeable comedies like Breakfast at Monsieur Henri's, you can safely move into this flat share. Worth seeing

Cinema trailer for the movie "Living together is better (Frankreich 2016)"
Loading the player ...