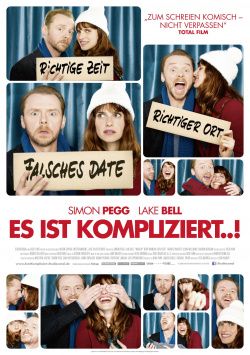 Thirty-something Nancy (Lake Bell) has long since given up hope that the right guy will ever cross her path again. She hates blind dates, it's much nicer to sit in front of the TV in comfortable clothes, watching The Silence of the Lambs and eating unhealthy food. The journalist doesn't want to hear relationship advice from anyone, not her married sister Elaine (Sharon Horgan) and certainly not a young, naive thing like Jessica (Ophelia Lovibond), who Nancy meets on the train on the way to her parents' house. But then it's Jessica, of all people, who inadvertently turns Nancy's life completely upside down. When she meets her blind date Jack (Simon Pegg) at the train station in London and he mistakes her for Jessica, Nancy doesn't clear up the mistake. Because between her and the sympathetic single man clicked immediately. And Nancy just can't pass up this chance. And so begins an almost perfect evening for the two of them - if it weren't for that one big lie...

It's Complicated...! is a refreshing romantic comedy in every sense of the word, scoring points with a very authentic, charming and funny leading lady and a co-star no less. The chemistry between Lake Bell and Simon Pegg (Shaun oft he Dead, Star Trek, Mission: Impossible) is just perfect and as a viewer you wish from the first time the two meet that they will find each other despite the big lie. Yes, the path to the inevitable happy ending is of course very clichéd and predictable, but the very likeable actors, the cheeky dialogue and some really surprising gags still make the film stand out from the crowd of similar comedies.

Aside from the slightly too overdrawn character of Sean (Rory Kinnear), who is morbidly in love with Nancy and is mostly responsible for the film's unnecessarily flat gags in addition to a few good laughs, the supporting characters are also very true to life and endearingly drawn. This is especially true of Nancy's parents, who are waiting for their daughter at her 40th wedding anniversary party. Director Ben Palmer has perfectly managed to portray what great love looks like after 40 years: somewhat ordinary, interspersed with a little bit of love-hate, but also pure tender harmony and friendship. Little glances are enough to see that the two love each other with all their hearts, despite little teasing. And that is exactly what you want for Nancy and Jack.

Ben Palmer, who celebrated great success with the series The Inbetweeners, the template for the two Sex on the Beach movies, does not completely renounce raunchy gags and brute humor. But on the one hand, this is kept within tolerable limits and on the other hand, even the more crude moments are served with so much charm that any form of possible Fremdschämen nipped in the bud and replaced by hearty laughter. Admittedly, there's nothing offered here that you haven't already seen somewhere else. But when your favorite dish is presented to you in a slightly different way, it can taste quite different and damn tasty. And that is exactly the case here. It's complicated. is a must for all lovers of cheeky romantic comedies. It's an enchanting and extremely funny film that makes it impossible not to fall in love with Lake Bell and/or Simon Pegg. For this there is a very clear: Absolutely worth seeing!

Cinema trailer for the movie "It's complicated...! (Großbritannien 2015)"
Loading the player ...