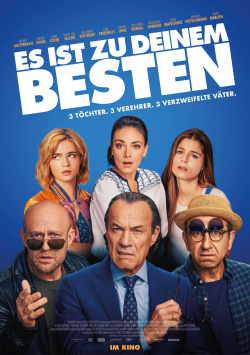 It's for your own good

Successful business lawyer Arthur (Heiner Lauterbach) seems to have reached the goal of his dreams: his beloved daughter Antonia (Janina Uhse) is going to marry a talented lawyer from his firm. And then it certainly won't be long before the couple will give him a grandson. But then comes the shock: Antonia leaves her future husband at the altar and elopes with a left-wing permanent demonstrator (Jacob Matschenz). His two brothers-in-law also have trouble with their daughters: Construction worker Kalle (Jürgen Vogel) learns that his Luna (Lisa-Marie Koroll) is involved with a much older nude photographer (Andreas Pietschmann). And physiotherapist Yus (Hilmi Sözer) likes the idea that his little angel Sophie (Lara Aylin Winkler) no longer spends her time with daddy, but only with Andi (Junis Marlon), who obviously has a bad influence on her. There is only one solution. The three mismatched dads must team up to get rid of their daughters' pesky suitors behind their wives' backs - no matter the cost.

"Es ist zu Deinem Besten" is a remake of a 2017 Spanish cinema comedy. Looking at the trailer of the original, Marc Rothemund seems to have delivered almost a 1:1 copy here. Even Heiner Lauterbach's hairstyle is the same as his Spanish counterpart. Moreover, one always feels reminded of the French cinema success "Monsieur Claude and his daughters". Lacking originality wouldn't really be a bad thing, though, if the result was at least really funny. Unfortunately, this is not the case at all.

This already starts with the characters. There are no real sympathetic characters here: the fathers are completely overdrawn idiots who mostly act completely stupid. Their wives aren't much better, as they also criticize their god husbands for worrying when their daughters are involved with a much older man or when drugs are found at their place. And the potential sons-in-law? One is absolutely rude (which is excused with family reasons, of course), the other is an absolute cliché leftist and the third is a rabbit's foot who runs away immediately when things get complicated. Oh man!

The humor is almost always very flat, brute and partly also very dusty. Granted, especially Jürgen Vogel and Hilmi Sözer are trying hard to get something out of their characters in terms of slapstick. But they can't really get good laughs either. "Es ist zu Deinem Besten" could have been a very funny film. As unoriginal as the story may be, it has a lot of comedic potential in it. But for that, the script should have broken away more from the original and from all too stale clichés and should have shown more cleverness and subtlety instead. As it is, the whole thing is a bitter disappointment and unfortunately not a particularly funny or even good movie. Therefore also applies: Only with clear deductions still worth seeing!

Cinema trailer for the movie "It's for your own good (Deutschland 2020)"
Loading the player ...