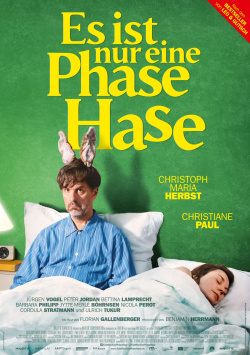 It's just a phase, bunny

Actually, author Paul (Christoph Maria Herbst) and voice actress Emilia (Christiane Paul) have always been the dream couple par excellence for their friends. But appearances are deceptive: Paul is in a creative crisis and Emilia is more than frustrated by her husband's inactivity - even in bed together. When she gets involved in a one-night stand with a younger man, it's the straw that breaks the camel's back. Emilia realizes she needs change in her life and Paul can't offer her that. The couple break up and the frustrated Paul seeks support in pills and an affair with a young teacher. Is divorce inevitable or is there still hope for the former dream couple?

"It's Just a Phase, Hare" is the new film from Florian Gallenberger, who won an Oscar for Best Short Film in 2001 and has demonstrated a great talent for dramatic material with films such as "John Rabe" and "Der Überläufer". There's no question that Gallenberger is a talented filmmaker, even if there's not much of that in this comedy. Here he relies on really flat gags and clichés from the lowest drawer, so that the film is everything - just not funny. Christoph Maria Herbst has shown in the series "Merz gegen Merz" how funny, biting and emotional a marriage crisis can be in a film or series. Now here he has to shove a metal ball up his backside right at the beginning - no doubt, it's damn funny.

Christoph Maria Herbst, Christiane Paul, Jürgen Vogel - they all play well. But what good is the best acting if the script and direction go against it. And that's exactly the case here: the story has neither wit nor charm, the dialogues are shockingly flat and the characters lack any real sympathy value. What went wrong here, I can't judge. But given the combined talent in front of and behind the camera, it's just sad that there's so little of it on screen.

Marriage crises in film can be so funny ("The War of the Roses") or can be incredibly emotionally moving ("Marriage Story"). "It's just a phase, Hase" succeeds at neither. And when the film does get its act together towards the end, it's unfortunately long too late - by then, as a viewer, you've long since filed for divorce! Only conditionally worth seeing!

Cinema trailer for the movie "It's just a phase, bunny (Deutschland 2021)"
Loading the player ...