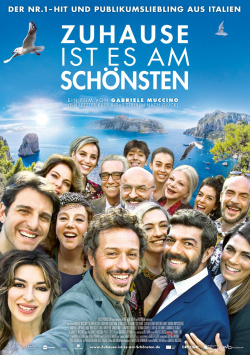 It's supposed to be a harmonious, beautiful family celebration when Alba (Stefania Sandrelli) and Pietro (Ivano Marescotti) invite guests to their golden wedding anniversary on the picturesque island of Ischia. But after all the guests initially strive for harmony, the first tensions soon arise. Son Carlo (Pierfrancesco Favino) gets to feel the bad side of his wife Ginerva's (Carolina Crescentini) jealousy, as his ex Elettra (Valeria Solarino) has also been invited to the celebration. Meanwhile, Sara (Sabrina Impacciatore), the daughter of the hosts, tries desperately to maintain the image of a happy marriage, while her husband Diego (Giampaolo Morelli) can't get off the island fast enough to travel to Paris to see his mistress. And Sara's brother Paolo (Stefano Accorsi) uses the celebration to start a fling with his cousin Isabella (Elena Cucci). These are just a few of the simmering hotbeds of conflict that threaten to erupt full-blown when the entire festive party is stranded by a storm on Ischia.

There's No Place Like Home was quite the crowd-pleaser in Italy, grossing over 9 million euros at the box office there. It's a successful homecoming for director Gabriele Muccino, who has returned to Italian cinema with this family comedy after some success in Hollywood (The Pursuit of Happiness, Seven Lives). To begin with, it's easy to see why the film has attracted so many people to cinemas in Italy. Muccino does a great job of introducing the many different characters with their relationships and conflicts with each other. You never feel overwhelmed as an audience member, despite the many different characters, and are carried through the first act with a humorous ease.

Even the stormy atmosphere that makes a return trip to the mainland impossible is really engagingly realized and becomes something of a character in its own right in the story. And with the budding love affair between Paolo and Isabella, there is some real romantic sparkle to the proceedings. It's all very predictable and familiar, but works really well. Until after about an hour the whole thing degenerates into emotional chaos and hysterical arguments. What was charming and funny a moment ago suddenly just seems annoying, over the top and extremely exhausting.

Sure, the simmering conflicts have to erupt, otherwise the movie itself would be completely pointless. It just would have been nice if Muccino had also handled this aspect of the story with a little more restraint, emotion, and not quite so raucous humor. The problem is that because of this completely over-the-top hysteria, some actually very emotional moments lose all credibility. Thus, Home is the most beautiful at the end, unfortunately, can not keep what the good beginning promises. A good ensemble of actors and a few very nicely captured snapshots save the whole thing from the complete collapse, so that it is still enough for a decent viewing value in the end.