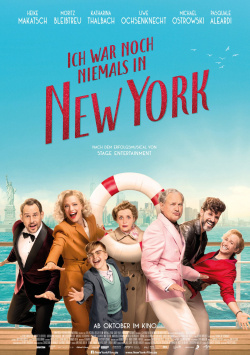 I've Never Been to New York

TV presenter Lisa Wartberg (Heike Makatsch) is on the verge of a nervous breakdown. Not only is her career hanging by a thread. Now, of all times, her mother Maria (Katharina Thalbach) also loses her memory in an accident. As if all this wasn't bad enough, the old lady escapes from the hospital and sneaks aboard a luxurious cruise ship as a stowaway. Because the only thing she can remember is that she has never been to New York and desperately wants to get there. Now Lisa, along with her makeup artist Fred (Michael Ostrowski), must set out to find Maria. But although she quickly finds her mother, the turmoil really begins. Because now Lisa is also an involuntary passenger on the "MS Maximiliane" and has to work off her missing ticket as a maid. She meets Axel Staudach (Moritz Bleibtreu) and his son Florian (Marlon Schramm). Sparks quickly fly between the two before the sizzling sparks fly. And Maria is also hit by Cupid's arrow when she meets the womanizer Otto (Uwe Ochsenknecht). Allegedly, the two even share a common past. But these are truly not the only surprises this cruise still has to offer before the ship drops anchor in New York.

Over 4 million people have so far seen the musical Ich war noch niemals in New York, based on the songs of Udo Jürgens. After ten successful years at fixed venues, the musical went on tour in 2016, which has once again boosted the number of visitors. Not least because of the huge success of the film adaptation of the hit musical Mamma Mia! it was then only a matter of time before Ich war noch niemals in New York would also be adapted for the cinema. Director Philipp Stölzl - actually a really good filmmaker - has done the unbelievable: He has robbed the musical of everything that made the stage version so charming and rousing and has let the whole thing degenerate into a squeaky-color parade of laughter that can confidently be called a disaster movie.

Yes, the film is very colorful. But does that automatically make it great fun? Not really. After all, the fact that the makers here rely on gaudy costumes, oh-so-fun hairstyles and false teeth is a testament to the level at which the whole thing operates. And also the actors are - with a few exceptions - just not very good, as they act way too exaggerated. Katharina Thalbach, for example, reduces her acting to a constant widening of her eyes. And her distinctive voice gets on your nerves in the long run.

The set is also atrocious. Why the ship is shown as an outdated piece of junk that wouldn't pass inspection and where the servants are housed like slaves is hard to understand. Apparently the constant anachronism is intentional, but fails to convince. Everything here seems artificial and such that you just don't feel comfortable in this place. This is quite different in the stage version. The dramaturgical changes are also clear deteriorations and drop almost everything that makes the original musical so worth seeing.

I am not a huge fan of Udo Jürgens, but was really thrilled by the musical. The songs - performed by trained musical actors - and the simple but nice story gave a real good mood feeling. And now and then it even got to the heart. On the other hand, I was annoyed by the cinema version for two hours. The singing is almost always terrible, the actors act as already mentioned completely exaggerated and the humor is extremely flat. For me, one of the biggest disappointments of the cinema year. Even with a lot of good will I give it a: unfortunately not worth seeing!

Cinema trailer for the movie "I've Never Been to New York (Deutschland 2019)"
Loading the player ...