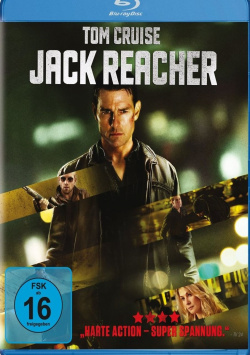 Film: With the former US military policeman Jack Reacher, author Lee Child has created one of the best and most popular characters in contemporary thriller literature. In 17 novels so far, the ruthless loner has already been allowed to fight his battle against evil. Almost fifteen years after Reacher saw the literary light of day, he is now also brought to life in the film.

Based on Sniper, the ninth novel in the series, Jack Reacher tells of a gruesome massacre in Indiana, in which five people are shot seemingly indiscriminately in an extremely cold-blooded manner. The perpetrator seems to be found quickly: all evidence points to the former army sniper James Barr (Joseph Sikora). But he remains silent on the charges and has only three words to say to the investigators: get Jack Reacher. A short time later, Barr is beaten so brutally during the prisoner transport that he ends up in a coma. The right time for Reacher (Tom Cruise) to appear on the scene. The cynical loner remembers Barr from his days in the military, when the sniper had murdered four people. Back then, Barr hadn't been convicted for purely political reasons - a slap in the face for Reacher, a justice fanatic, of course. As much as Reacher wants to believe that Barr pulled the trigger again in this massacre, his investigation soon suggests that the ex-soldier was the victim of a conspiracy. Together with dedicated lawyer Helen Rodin (Rosamund Pike), Reacher sets out to track down the real perpetrators from among the mysterious The Zec (Werner Herzog). But they have long since begun their hunt for Reacher, a hunt that can only end in carnage...

Because Jack Reacher is described in the novels as a nearly six-foot-tall hunk with blond hair and blue eyes, scarred by life and his many struggles, the news that Tom Cruise, of all people, would be slipping into the role of the popular hero was met with little favor, especially by fans of the books. But even if Cruise doesn't live up to readers' expectations, he doesn't end up proving to be the miscast that was initially so indignantly panned. For not only does he deliver some very successful one-liners with utterly convincing coolness. Also in the fight and action scenes Cruise makes a very good figure.

While Cruise has already proven in the past and especially in the Mission: Impossible films his skills in the action department. But he still enters new territory here in some respects, as Jack Reacher is the exact opposite of Ethan Hunt. For while Hunt has various technical gadgets and his team to fall back on, Reacher is almost a kind of relic, relying only on himself and his fists. He owns no car, no cell phone, has no family or friendship ties, and only takes up arms when he can't resolve the situation in a direct duel. He does so with absolute precision and merciless brutality. His clear understanding of good and evil also saves him from any form of guilty conscience or moral doubt.

Director Christopher McQuarrie, who won an Oscar for his screenplay for The Usual Suspects, has directed a tangible and quite earthy action thriller that manages to entertain well with a fairly suspenseful story, good action and a light touch of humor. However, the whole thing also seems a bit stale and too ordinary to really surprise. The movie is a solid thriller, like there were plenty of them in the 80s and 90s. Apart from a few dramaturgical lengths, this still works very well in 2013. But the film lacks the spark that makes a good thriller into a first-class thriller that is not only exciting, but also surprising and innovative in some way. But if you like classic vigilante thrillers with good fight scenes, Jack Reacher will definitely serve you well. No absolute hammer, on entertaining genre entertainment, which has absolutely earned a worth seeing!

Picture + Sound: Technically, the viewer is offered here quite high quality. The picture is absolutely clean and has a decent depth and excellent sharpness, which clearly reproduces even the smallest details in close-ups. The soundscape is similarly accomplished, with dialogue sounding clearly mixed from the speakers, while great surround effects and powerful bass provide plenty of dynamics. Very good!

Extras: The additional offerings start with two audio commentaries. The first comes from Tom Cruise and director Christopher McQuarrie. The conversation between the two men is very matter-of-fact, but offers plenty of information in the process and is extremely insightful. Commentary 2 is not a straight audio commentary. Rather, it is an isolated audio track featuring the film's score, which is repeatedly interrupted by explanations by composer Joe Kraemer. Anyone interested in film music should definitely give this a listen. Both commentaries offer different subtitle options.

Continue with the short documentary When the Man Shows Up (approx. 27 min.), whereby it is a rather standard making of, which offers a lot of interesting insights into the filming besides the usual promo praise, however. Another featurette looks at the weapons and combat training (approx. 11 mins) and the Jack Reacher phenomenon is also scrutinised in a short featurette (approx. 11 mins). Good!

Conclusion: Jack Reacher is a solid action thriller with a convincing Tom Cruise. However, the film lacks that special something that would make it equal to its book counterpart and make it stand out from the crowd of similar genre entries. Nevertheless, the entertainment value is high enough to be able to attest this well-realized Blu-Ray disc a recommend!