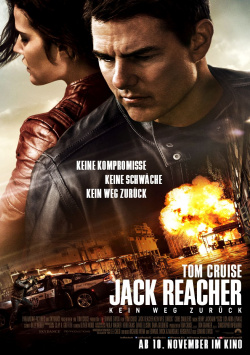 Jack Reacher - No Way Back

Jack Reacher (Tom Cruise) is back. The former military policeman must abandon his self-imposed seclusion when his replacement, Major Susan Turner (Cobie Smulders), is accused of espionage and placed under arrest. Reacher, who has been in constant contact with Turner, is certain she is innocent and decides to do everything he can to prove it. But there's nothing to be done through official channels, so Reacher has to use his unconventional, hard-hitting methods again. He frees her without further ado from the hands of the military. Together they now try to uncover a murderous plot. The fact that Reacher himself comes under suspicion of murder and that they are being hunted all over the country doesn't make things any easier. But things only get really dangerous when his enemies set their sights on Reacher's supposed daughter - the only question is for whom this will be more dangerous.

Following the solid success of the first adaptation of Lee Child's cult novel character Jack Reacher, which grossed over $200 million worldwide, a sequel was quickly a done deal. Because on the one hand Tom Cruise is still a crowd puller and on the other hand there are still numerous stories around Jack Reacher, which can also provide exciting entertainment in the cinema. With Edward Zwick, a director has been engaged who has already worked with Tom Cruise on Last Samurai. So the signs are good that also Jack Reacher - No way back could be a full success again.

Quite clear: When Jack Reacher strikes, the entertainment value of the sequel also rises rapidly. The action is well staged and Tom Cruise again delivers absolutely convincingly here. The problem with the film, however, is that the story itself is relatively conventional and, in addition to numerous clichés, also has a surprising number of tough moments. The high tension, which part 1 could still show over long stretches, comes here unfortunately only occasionally. In addition, the character of Reacher's supposed daughter is a walking stereotype, which is completely unnecessary for the story itself. Sure, by making it really personal this time his opponents are supposed to give it an extra intensity. But since that doesn't really want to work, this aspect and character could have been left out. Because the chemistry between Reacher and Turner is so good that it would have been completely enough to make the hunt for the truth in this case exciting and entertaining.

While the first Jack Reacher was still a very positive surprise in the action thriller genre, Jack Reacher - No Way Back is unfortunately just very ordinary, interchangeable B-ware. The whole thing is entertaining, no question. And the action is, as already mentioned, absolutely worth seeing. But that's all this movie has to offer. TOO little suspense, too few surprises and too many lengths to be able to really sweep you off your feet. And at the end of the day that's only enough for one: Worth seeing with restrictions