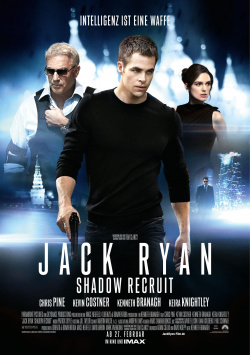 After attempting to reboot the popular Jack Ryan series back in 2002 with Ben Affleck replacing Alec Baldwin and Harrison Ford in a rejuvenated form, the next reboot experiment is now underway with Jack Ryan: Shadow Recruit. Chris Pine (Star Trek) is now the fourth actor to take on the role of the character dreamed up by writer Tom Clancy, who gets to return to his beginnings here under the direction of Kenneth Branagh.

After the September 11 attacks, Jack Ryan (Chris Pine) wants to fight for his country and volunteers to serve in Afghanistan. When his helicopter is shot down there and Ryan is seriously injured, his time in the military comes to an abrupt end. But with the help of physical therapist Cathy Muller (Keira Knightley), Ryan fights his way back to life. The dedication he displays impresses CIA agent William Harper (Kevin Costner) so much that he recruits the ex-soldier after his recovery. Ryan is assigned to Wall Street, where he's tasked with looking out for flashy financial transactions for the government. Tooth years later, his work puts him on the trail of Russian oligarch Viktor Cherevin (Kenneth Branagh), who appears to be planning a devastating attack on the global financial system. It's time for Jack Ryan to leave the safety of his desk and embark on a dangerous field assignment that will do nothing less than prevent an international crisis of unimaginable proportions. But is Ryan's intelligence enough to take on an ice-cold and powerful adversary like Cherevin?

Kenneth Branagh has directed a very straightforward thriller with Jack Ryan: Shadow Recruit that offers few surprises and even feels a wee bit dusty with its Russian antagonist. Nevertheless, this new Jack Ryan offers solid genre entertainment throughout, which even knows how to captivate in some scenes and has some decent moments of suspense to show. There isn't much action, but when it is used, it is absolutely first class staged. Whether it's a wild chase through the streets of Moscow or a tangible duel in a hotel room, Branagh does a great job of staging the more action-packed elements of his thriller in an appealing and engaging way.

The actors also deliver convincing performances. While Chris Pine acquits himself valiantly as the title character, Kevin Costner leaves a consistently positive impression as the fatherly mentor. Kenneth Branagh himself clearly had great fun miming the villain. What makes his character so successful is not only Branagh's acting, but also the fact that Cherevin is not a completely one-dimensional villain, but that he is also given a certain humanity. This makes him interesting as a character and his understandable obsession all the more menacing. So while Cherevin and Harper in particular are really well-drawn characters, Keira Knightley as Ryan's girlfriend Cathy remains rather pale. True, there is an attempt to ascribe some importance to her role. But in the end, Knightley is not much more here than pretty show value without any real content.

Overall, all the positive ingredients and the small weaknesses ensure that Jack Ryan: Shadow Recruit has become diverting entertainment without much long-term impact. It's a fun film to watch, but it's also quickly forgotten after the credits roll. That's still enough to justify a trip to the cinema. But for a truly successful and long-lasting revival of the Jack Ryan franchise, it's just not enough. So if you're not expecting a deep political thriller or an action masterpiece, but just feel hungry for rock solid genre fodder, Jack Ryan: Shadow Recruit can be warmly recommended. Worth seeing