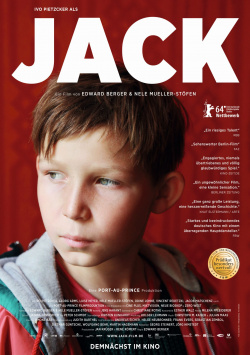 Jack (Ivo Pietzcker) is just ten years old. Yet he already has to take full responsibility for the household and for his little brother Manuel (Georg Arms). Yet it's not as if his mother Sanna (Luise Heyer) doesn't love her sons. But at 26, she's almost still a child herself and is so preoccupied with herself that she sometimes just loses sight of the boys' best interests. As a result, Jack has to go to a home, but he doesn't feel comfortable there at all. He can't wait for summer vacation to start. But on the day she is supposed to pick him up, Sanna doesn't show up. Without further ado, Jack sets out on his own, picks up Manuel from a friend's house and sets off with his six-year-old brother to find his mother. With no money, no food, and no clue as to where Sanna might be, the kids wander the city. What begins is a grueling odyssey that causes the boy to see his relationship with his mother in a whole new light.

Jack is a very difficult film. Difficult to endure and difficult to judge. Ivo Pietzcker's acting leaves a lasting impression and is both magnificent and depressing in its absolute naturalness. The boy manages that nothing seems to be acted and that you as a viewer forget at some point that you are watching a feature film here. And that's exactly what makes the whole thing hard to bear. Because the world Jack has to stand his ground in is filled with injustice, desolation and it seems inevitable that he will be trapped on the lower social rung for the rest of his life. Even if the ending gives some hope, the film as a whole is permeated with a certain hopelessness and resignation that weighs very heavily on the viewer's mind.

To see Mother Sanna as the culprit for all the misery is indeed obvious. But that would make things far too easy for oneself. And that's why the directing duo Edward Berger and Nele Mueller-Stöfen refrain from portraying her as a pure bad mother. You take it from her that she doesn't really mean her behaviour badly and that she really loves her sons. While this does not excuse her behavior, it does make it clear that there are many other aspects to consider here that are responsible for the situation Jack and his brother find themselves in.

Jack refrains from using typical cinematic devices such as film music or a clearly discernible dramaturgy. But this also breaks down the fictional wall and creates a realism that makes the whole thing enormously depressing. And as much as one would like to see the performance of the young actors in particular appreciated, it's hard to make a recommendation for spending 10 euros on this to feel bad. No question, for what it wants to be, Jack is a very good, even excellent film in places. But it's also extremely heavy fare that you have to be willing to open up to first. For those who see cinema as an escape from reality and just want to switch off for two hours in exchange for the ticket, this movie can't be recommended at all. If, on the other hand, you have a soft spot for true-to-life program cinema fare and place more value on acting qualities or a rousing production than on a feel-good effect, then this drama can be warmly recommended to you. And in this case it's clearly worth seeing

Cinema trailer for the movie "Jack (Deutschland 2014)"
Loading the player ...