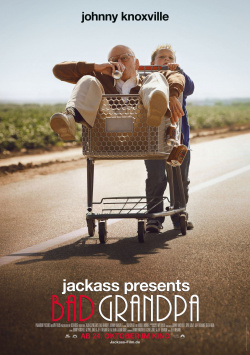 For fans of the Jackass series and movies he is an old acquaintance: Irvin Zisman, that irreverent retiree who has shocked many an innocent bystander and made his viewers laugh heartily with his always politically incorrect and obscene behavior. Now Jackass star Johnny Knoxville gets to step back into his signature role as Irvin Zisman. Together with Jeff Tremaine, the director of the three Jackass movies, and producer / screenwriter Spike Jonze Knoxville sends the spry lecher in the best Borat manner on a journey across the U.S., on which he of course again all sorts of macabre, shameless and sometimes disgusting fun with his compatriots.

Support he receives from his eight-year-old grandson Billy (Jackson Nicoll). After his crack-addicted mother is sent to jail, 86-year-old Irvin is tasked with taking the boy to meet his useless father - even though Irvin would rather spend his time in strip clubs or fishing. The two embark on a road trip of a very special kind, where pinched genitals, the late Mrs. Zisman, shoplifting, and even a little-girl beauty pageant will play a big part.

Jackass: Bad Grandpa is a mix of posed, scripted scenes and moments captured on hidden camera. While these don't always feel 100% authentic either, they undoubtedly have the most entertainment value. While Knoxville and co. repeatedly overshoot the bounds of good taste here, overall they remain much more well-behaved than in Jackass. Sure, pinched genitals, spray diarrhea, Irvin's visit to a club where some male strippers are currently pleasuring the ladies or the funeral service for his wife are not exactly what one would commonly call level entertainment. But despite a high Fremdschäm factor that prevails in such moments, genuine disgust is still very much in check - and you would not necessarily have expected from the Jackass team.

No question, who already knows and loves Irvin Zisman, will also have a lot to laugh in this film. But unfortunately, Jeff Tremaine too often misses the opportunities to comment a little more bitingly on the foibles of his compatriots. Only in a really unspeakable children's beauty contest shines through a little of what the film could have been: an irreverent, biting satire on the American way of life, where the laughter is almost painful. As it is, however, Jackass: Bad Grandpa is an entertaining Borat-style comedy for fans that could have used a few more good laughs and a little less flat gags. For Irvin Zisman fans and riot renter still well worth seeing!