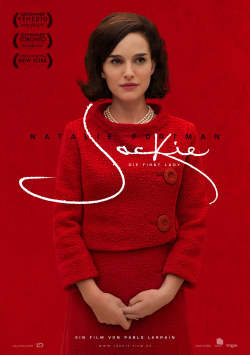 1963: All of America is in shock when their President John F. Kennedy falls victim to an assassination attempt in Dallas on November 22. Especially for the popular First Lady Jackie Kennedy (Natalie Portman) a world is breaking down. It seems as if she has lost everything that meant something to her: The love of her life, the life of the flashbulbs, and what she saw as her life's mission. Just days after her husband's murder, she watches as politicians and the media begin to destroy his memory. And so she decides to show strength in her grief and take care of John F. Kennedy's legacy.

With Jackie, director Pablo Larrain ventures into a portrait of a true icon in the darkest hours of her life. He begins a few days after the assassination and then keeps switching between past and present. From the individual snapshots, he then slowly weaves the picture of a woman, trying to bring out the different facets of these personalities who are as well-known as they are mysterious. Accompanied by an almost elegiac soundtrack, which however can quickly get on your nerves, the film lives primarily from its strong leading actress and the very authentic set.

There is, unfortunately, little else going for this biographical drama. The slow, meaning-laden staging of each scene is not gripping, but simply boring in the long run. It quickly becomes clear what Larrain wants to say with the individual scenes and the symbolism that is not exactly subtly packaged in them. However, this could have been achieved with a slightly more stringent or rousing narrative. This spasmodically anti-mainstream production wants so badly to be artful. And yes, of course, some viewers may take it that way. It may be that this storytelling is perceived as elegant, artfully arranged and moving not only by the feature pages and festival juries, but quite possibly by many an arthouse aficionado as well.

But for most viewers, Natalie Portman's genuinely good acting and a few strong moments may not be enough to keep them riveted until the dramaturgically completely unnecessary final scene. Jackie is a too ambitious work, which has its strengths, but they don't stand up to the many weaknesses. And that's why: Only recommended for lovers of worn staged art cinema!