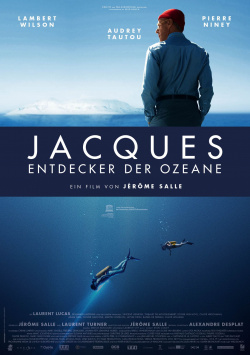 Jacques - Discoverer of the Oceans

Jacques Cousteau (Lambert Wilson) loves the sea. And he wants to infect as many people as possible with his enthusiasm for the oceans. Intensively he tinkers with methods to be able to dive deeper and longer and to be able to capture on film everything that can be seen there. For this he needs wealthy financiers, which forces him to work with big oil companies. For his son Philippe (Pierre Niney), this very collaboration is a thorn in his side. He feels that his father has sold his soul and that success is more important to him than protecting the oceans and their inhabitants. Between the two of them there is always tension, which threatens to end in a complete rift. Only during a dangerous expedition to the Arctic do they find their way back together. But then something happens that changes Jacques Cousteau's life and work forever.

Jacques - Discoverer of the Oceans is an opulent biopic that manages to avoid degenerating into pure hero worship. For much of the film, it is not Jacques Cousteau who is the film's sympathetic figure, but his son Philippe. He is given so much space that one wonders if the film has the wrong name. But there is a reason for that. Director J&eacute;rome Salle builds the difficult relationship between father and son so extensively to make the viewer understand why Jacques Cousteau became the man people ultimately remember him as and whose legacy is so important to our oceans.

The film's imagery is simply spectacular, which of course is primarily true of the underwater shots. But even above the sea, Salle and his team have found a visual language more than worthy of the big screen. Dramaturgically, however, the film is on a very conventional level, comparable, for instance, to the Grzimek biopic that was shown on television last year. Characters like Cousteau's wife Simone, embodied by Audrey Tautou, remain rather pale and cannot elaborate their developments plausibly enough.

This is not to say that Jacques - Discoverer of the Oceans is a bad film. It simply has too great pictures and too good actors to offer for that. But the story, which is rousing in itself, simply gets lost in too many common clichés to be able to unfold its full emotional power. Thus, this drama remains a little bit interchangeable despite its first-class production. Even if the top mark is clearly missed, it is still enough for an absolutely satisfied: "Worth seeing!

Cinema trailer for the movie "Jacques - Discoverer of the Oceans (Frankreich 2016)"
Loading the player ...