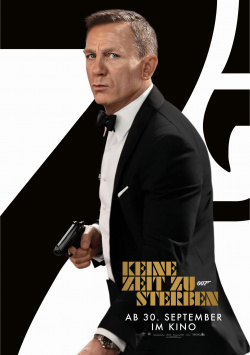 That we can still experience this: after what feels like countless postponements, the new James Bond is finally playing in our cinemas: Daniel Craig's final appearance as 007 begins with a Bond who, after another confrontation with Spectre, has hung up his license to kill and retired to Jamaica. The new life doesn't last long, however, because one day his old CIA colleague Felix Leiter (Jeffrey Wright) shows up on the scene asking Bond for help. A scientist who has been working on a highly explosive project for British intelligence has been kidnapped - and with him, an extremely dangerous weapon that, in the wrong hands, could pose a threat to all of humanity. Bond is persuaded to go on a rescue mission, but it quickly takes a very personal turn for the former 00 agent...

"No Time to Die" is the 25th (official) Bond film. Six years have passed since 007's last outing, and that begs the question - especially given all the postponements in recent months - was it worth the wait? For me, having grown up watching Bond films, the answer is clearly yes - even if Daniel Craig's nearly three-hour swan song is not without its flaws and lengths. For now, though, I'll start with the things I liked: There's the opening sequence, which begins after a rather unusual introduction for Bond films, set several years in the past. This scene starts off rather romantically before turning into a slick action sequence that gives off plenty of genuine Bond flair.

After the obligatory opening credits, fans then get to enjoy elements they know and love from other Bond films - accompanied by the music of Hans Zimmer, which more than once recalls the classic scores of John Barry. Highlights here are the performances of Ana de Armas, who has already appeared with Craig in "Knives out", and Christoph Waltz, who plays a little more subdued this time around, making him much more menacing as Blofeld than he was in "Spectre". But here I already come to my first point of criticism: Both appearances are far too short, even if the trailers suggested otherwise.

Back to the positive things: first and foremost there is Daniel Craig, who once again gives his all on all levels. His Bond is sometimes humorous and charming, sometimes cold and brutal and then again very emotional. Everything that has made James Bond such a special figure in cinema history for decades, Daniel Craig brings one last time in top form on the parquet - only as a womanizer he has to act a little more reserved in this film, but this has a dramaturgical reason. Also, the locations, sets and music look absolutely great, especially in the cinema. Yes, in that respect it was really worth the wait.

But as I said, there are also things that don't work so well. For one, the motive of villain Lyutsifer Safin, played by Oscar winner Rami Malek, is... well... rather weak. It doesn't work as well as the new 007 agent Nomi (Lashana Lynch), who comes across as extremely unlikable, especially at the beginning, and who doesn't show up for support in a crucial scene, even though she's supposed to be close by. As such, this character is actually almost completely unnecessary to the story. M (Ralph Fiennes), Q (Ben Whishaw) and Moneypenny (Naomie Harris) all have good but too brief appearances. Especially since this is the conclusion of Daniel Craig's Bond's five-film tenure, it would have been nice to give these characters a little more space. Very nicely resolved, on the other hand, was an almost incidental bow to Judi Dench, the former M.

The last point is one I don't really want to talk about, to avoid spoilers at all costs. To make a long story short: Opinions will be divided on the finale - especially among true Bond fans, it's guaranteed to be controversial. I'm still not quite sure what to make of it. But: the choice for the closing song is simply brilliant and adds a very special intensity to what you have just seen - especially since you understand the reference (which should be no problem for Bond fans, of course).

is not my favorite Bond in general, nor specifically by the best of the Daniel Craig films. For me, it comes after "Casino Royale" and "Skyfall". If the whole thing had been tightened up a bit (you really notice the long running time in places) and if the villain had had a slightly more interesting motive for his actions, I guarantee the whole thing would have worked better. But as it is, it's still a very entertaining Bond and a worthy farewell to Daniel Craig, who has left some pretty big shoes for his successor to fill. Absolutely worth seeing!