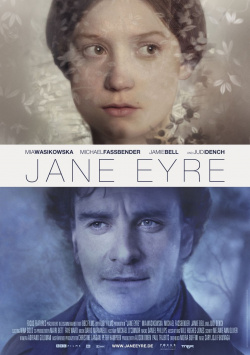 Literary adaptations that come in the form of opulent costume dramas are a dime a dozen. Along with Jane Austen's novels, Cherlotte Brontë's novel Jane Eyre is also adapted for cinema or television with nice regularity, always trying to convince a new generation of the power of the story first published in 1847. Now the latest version is coming to our cinemas.

Until now, life has not been kind to 18-year-old Jane Eyre (Mia Wasikowska). Raised as an orphan by a loveless aunt (Sally Hawkins) and a sadistic cousin, Jane has yet to experience one emotion in particular: love! But when she takes a job as a tutor at Thornfield Manor, she quickly finds herself drawn to the aloof, and in his own way, very intriguing, master of the house, Edward Rochester (Michael Fassbender). Although the two become closer over time, Edward seems to be more interested in the beautiful Blanche (Imogen Poots). But then the unthinkable happens: Edward proposes to Jane. Their happiness seems perfect. But fate has other plans for Jane Eyre.

Jane Eyre is a real surprise in more ways than one. For one thing, Cary Joji Fukunaga was certainly not expected to make a historical romance drama as a follow-up to his acclaimed directorial debut Sin Nombre. But for another, Fukunaga has managed to breathe new life into the classic material. While his Jane Eyre isn't convulsively modernized, it still doesn't feel antiquated or dusty at any second. With great actors and immersed in wonderful imagery, the young filmmaker manages to keep audiences glued to the characters, keeping them riveted to an inherently familiar story until the touching finale.

Mia Wasikowska also knows how to surprise. Whereas as Alice in Tim Burton's Alice in Wonderland she was completely upstaged by the 3D effects, here she is able to unleash a strength that alone would almost be enough to carry the film. But with the support of the once again superb Michael Fassbender, a wonderful Judi Dench and the very understated Jamie Bell, Wasikowska doesn't need to carry that burden on her shoulders alone. Rather, she becomes part of a coherent ensemble, with each performance supporting the others, making Jane Eyre a great piece of acting cinema.

However, even the most beautiful images and the best actors wouldn't help if the dramaturgy wasn't right. Here, Fukunaga has done a first-rate job. With the help of the screenplay by Moira Buffini (Always Drama about Tamara), he weaves a captivating web of love, despair, fear and hope around the viewer, who can hardly escape the still gripping and moving after more than 150 years. Jane Eyre is a wonderful drama, a touching love story, a visually stunning piece of cinema that should not be missed by fans of sophisticated entertainment fare. Worth seeing