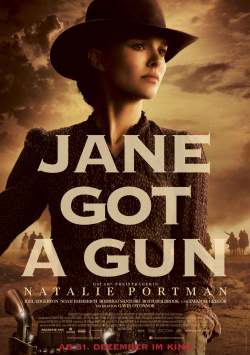 Jane got a Gun

All Jane (Natalie Portman) wanted was to live a happy life in peace with her husband Bill Ham Hammond (Noah Emmerich) and their daughter in New Mexico. But John Bishop (Ewan McGregor), leader of the dreaded Bishop Boys, has something to say about that. Several years ago, Jane had joined the gangster's trek, unaware of whose hands she was walking into. When she realized it, she escaped with Ham's help. Since then, Bishop has been out for revenge. Now his gang has tracked Ham down. With several bullets in his back, he just manages to drag himself home and warn Jane. She knows she can't stand up to Bishop and his men alone. But to save her life and her daughter's, she must confront her old enemy. And so she has only one choice: she must ask her former fiancé Dan Frost (Joel Edgerton) to help her. He still doesn't take too kindly to Jane, but is persuaded to help Jane and Ham anyway. Together they hole up at Jane`s ranch and wait for Bishop to strike with concentrated force.

With Jane got a Gun, director Gavin O`Connor (Warrior) delivers a first-rate Western that boasts a strong title character, great camerawork and a wonderful finale. It`s also this final act that makes some of the lengths along the way easy to forget. Because while all of the actors - most notably Natalie Portman, her Star Wars co-star Ewan McGregor as a smarmy villain, and Joel Edgerton as a biting anti-hero - deliver really, really good performances and are a joy to watch, there are some moments that are tougher than the leather of Jane's cartridge belt. Especially in the first third, you shouldn`t expect an action-packed suspense western. Rather, O`Connor takes his time building up the story and explaining its backstory in flashbacks.

This does require a certain amount of patience on the part of the audience, but then pays off in full in the final third. Not only do some moments gain emotionality from the slow exposition. Also the characters - first and foremost Jane of course - gain a depth through which a closer bond with the audience is built. So, what might have been seen as boredom at first turns out to be a great strength of this in large parts classic and yet very modern western in the end. Towards the end you get an extremely leaded shoot-out, which is hard to beat in terms of suspense. First-class choreographed and superbly executed, this showdown is one of the best that the ever-blooming Western genre has had to offer in recent years.

A pleasant dash of dry humor then also prevents the film from taking itself too seriously. At moments when it's appropriate, it does hit with full dramatic force. But it also allows itself a touch of irony every now and then, so as not to become too dry or even unintentionally funny. All of this paired with the great landscape shots makes Jane got a Gun a really successful representative of its genre, which allows Natalie Portman to fully play out her acting talent. If you can get into the somewhat plodding beginning, this western can be warmly recommended. Worth seeing