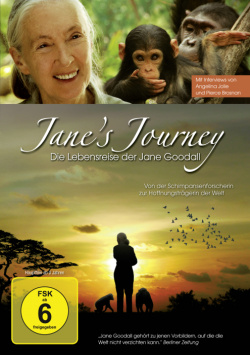 Film: As a young woman, Jane Goodall dedicated her life to the study of chimpanzee life. She has always lived among the monkeys for a long time and has gained insights that can be described as groundbreaking. But over the years, Jane Goodall has learned that our planet still has so much to offer that it is worth discovering and fighting for. As the founder of the Jane Goodall Institute for Wildlife Research, Education and Conservation and as a UN peace ambassador, Goodall travels around the globe almost all year round to fight for the conservation of nature.

The documentary "Jane`s Journey - Die Lebensreise der Jane Goodall" allows the viewer to get to know this great and important woman and her work better. Beside small insights into her life, the film shows why Goodall has such an incredible effect on the people she meets. Companions, employees, celebrities like Angelina Jolie and Pierce Brosnan and relatives have their say to show the interested audience what kind of person the 76 year old Goodall is today.

With a lot of wit and empathy, but also strength and perseverance Jane Goodall has made an incredibly important contribution to our planet. Unfortunately, the documentation only does justice to this contribution to a limited extent. Because at times it seems as if the makers couldn't really decide whether they want to make a movie about life or about Jane Goodall's work. So here we try to work through both components as it were, whereby both again get a little too short in important aspects.

But this is only a relatively small weak point in an overall very entertaining, interesting and also moving documentary, which gives back hope to mankind and awakens the wish that there should be many more people like Jane Goodall. Absolutely worth seeing!

Picture + sound: As only a data-reduced press sample was available for the test, no rating can be given for the final quality of picture and sound, especially the German voice-over sound produced especially for the DVD.

Extras: The DVD has a 33 minute lecture by Jane Goodall and the trailer. A worth seeing addition to the documentation.

Fazit: "Jane`s Journey - Die Lebensreise der Jane Goodall" is a worth seeing documentation about an admirable woman, which hopefully many people will follow. A German voice-over sound was specially recorded for the DVD, so that viewers who do not speak English no longer have to concentrate on the subtitles. Recommended