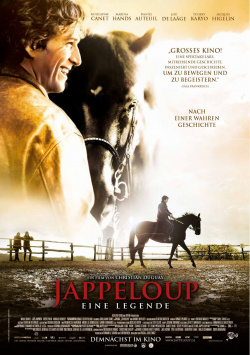 Even as a boy, Pierre Durand (Guillaume Canet) had developed a great love for horseback riding, a love that would lead him to a promising career on horseback as a young man. But after a fall, Pierre decides to focus on his law studies first and give up riding. It is a decision with which Pierre is never really happy in the following years. When he falls in love with his childhood friend Nadia (Marina Hands) and spends more time with his parents near Bordeaux, Pierre's love for riding flares up again. With the support of his father Serge (Daniel Auteuil), Pierre puts all his eggs in one basket: he quits his lucrative job in Paris and devotes himself entirely to training the young horse Jappeloup, who nobody really wants to give a chance. But Pierre recognizes the great talent that lies dormant in the spirited horse. And indeed, after initial difficulties, the two of them ride from success to success, until Pierre comes ever closer to his very big dream: participation in the Olympic Games.

What the Americans have with their Seabiscuit, the French have with their Jappeloup. Both are horses who, against great odds, have become legends and whose stirring story has been retold in no less stirring films. And in both stories, the focus is not only on the horse, but also on its rider. Jappeloup - A Legend not only tells the story of how a too small stubborn horse became a celebrated show winner. The film by Canadian director Christian Duguay also shows how Pierre Durand's life was permanently changed by Jappeloup.

Dramaturgically, the whole thing offers no big surprises. You don't need to know the true story to be able to anticipate the course of the plot with all its minor and major twists and turns. But even though the script of lead actor Guillaume Canet is rather moving on very common paths and there are some minor lengths here and there, Jappeloup - A Legend is never really boring. On the one hand, this is due to the very well-developed characters, who quickly grow on the audience. On the other hand, however, it is due to the dense, visually very engaging production, which manages to present even scenes with the greatest predictability still gripping and rousing.

Borne by a convincing ensemble of actors, the film gallops with always high entertainment value through the story spanning several years, without ever obviously stumbling. On the one hand, this straightforwardness might have prevented Jappeloup - Eine Legende from becoming a big mushroom. On the other hand it makes sure that the viewer can just let himself go and enjoy the story told in beautiful pictures. And this succeeds very well, even if you have never heard of Pierre Durand and Jappeloup before.

For those who appreciate films like Seabiscuit or Secretariat and don't necessarily expect a typical girl-horse movie like Eastwind, this successful, if a bit too long, mixture of family film, romance and equestrian drama can be warmly recommended. Worth seeing

Cinema trailer for the movie "Jappeloup - A Legend (Frankreich 2013)"
Loading the player ...