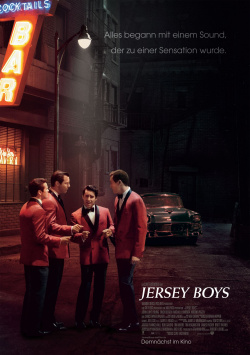 Clint Eastwood is not someone you would necessarily associate with a musical. But in fact, Dirty Harry has ventured into the big screen adaptation of the award-winning musical play Jersey Boys with his latest directorial effort. It tells the story of the legendary pop group The Four Seasons led by singer Frankie Valli (John Lloyd Young). Four young men from humble backgrounds join forces in New Jersey to make big money with their music. The unique voice of Frankie and the great talent of songwriter Bob Gaudio (Erich Bergen) should be enough to bring the hoped-for success. But unfortunately, things don't work out so easily in the tough music business. After having to make do with thankless jobs as backing singers for over a year, the band put all their eggs in one basket. With borrowed money and new compositions in their luggage they buy a studio session, which is the beginning of a world career that has produced immortal hits like Sherry, Big Girls don`t cry or Walk like a Man. But with success does not automatically come great happiness. While Frankie`s marriage suffers more and more from the extended tours, the relationship within the band crumbles more and more, especially because of the moods of Frankie`s childhood friend Tommy DeVito (Vincent Piazza). When it comes out that Tommy has large debts and has also helped himself to the band's money, the end of the Four Seasons seems unstoppable.

Jersey Boys is less of a musical and more of a very musical biopic. As such, it follows the rules of the genre very strictly, but still stands out from other works like Ray or Walk the Line for several reasons. You can tell that Clint Eastwood, as well as his screenwriters Marshall Brickman and Rick Elice, the writers of the prestigious Tony Award-winning stage version, wanted to lovingly memorialize the music, the times, and the very unique world of New Jersey. To be sure, there is such passion in other biopics, but rarely is it as evident as it is here.

Eastwood's film also benefits from the decision to cast many roles with the actors who have played them on Broadway. You realize that the actors are intimately connected to these characters and can disappear completely behind them. John Lloyd Young, for instance, never comes across as just playing Frankie Valli. Especially in the scenes where he is allowed to perform the hits of the Four Seasons, he really becomes Valli and takes the audience back to the wild sixties, at least for a short time. The good set and some visual effects that are not recognizable as such further support this impression.

Dramaturgically, Jersey Boys has turned out somewhat conventional. However, the decision alone to have some of the protagonists repeatedly speak directly to the audience as narrators adds a special touch to the story that at least some of the more tame moments can definitely benefit from. This is definitely helpful with a running time of over two hours, because even the rousing music and an excellent director like Clint Eastwood can't prevent minor lengths here and there. But especially those viewers who like such biopics and especially love the music of the Four Seasons will hardly notice these annoying.

A first-class camera work, perfectly staged musical interludes, a cast excellently chosen up to smaller supporting roles (Christopher Walken is simply wonderful as gangster Gyp DeCarlo) and of course the great soundtrack ensure that the Broadway success was convincingly transported from stage to screen. If you love musical films in general and the music of the 60s in particular, you definitely shouldn't miss this charming and rousing biopic. Absolutely worth seeing