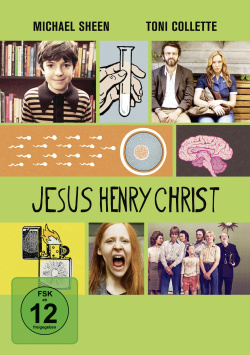 Film: Ten-year-old Henry James Herman (Jason Spevack) finally wants to know who his father is. The result of artificial insemination, Henry, a child prodigy, has the answer to almost every question. Only the identity of the donor of the genetic material that led to the fertilization of the egg of his feminist mother Patricia (Toni Collette) remains a great mystery for the boy. But then his grandfather Stan (Frank Moore) gives him an unexpected gift: he has located Henry's half-sister. And she could lead the boy straight to his biological father. Too bad Henry`s potential half-sister Audrey (Samantha Weinstein) doesn`t want to have anything to do with other people and certainly not with her father Dr. Slavkin O`Hara (Michael Sheen), who just made her a test subject for his latest book. Henry now seems to have found his father, but now has two dysfunctional families at once, and twice as many problems as before. When Patricia increasingly fears being estranged from Henry and then Slavkin's paternity in general is called into question, the chaos is perfect...

Director Dennis Lee, who previously directed a very dramatic material with Back in Summer, now tries his hand at comedy with Jesus Henry Christ. In doing so, he clearly takes his cue from smaller indie successes like Juno or Little Miss Sunshine. The attempt to stage original and intelligent jokes off the beaten mainstream path, however, sometimes seems a bit forced and too much of a good thing. A talking baby or the very black humorous way of the demise of Patricia's mother and siblings don't seem quite as elegantly staged. Also, when a conversation between Henry and his grandfather switches to Spanish in the best telenovela tradition, Lee doesn't exactly prove to have a knack for comedic timing, as this scene drags on unnecessarily.

But overall, this quirky comedy leaves a very positive impression. One of the reasons for this is the cast. While the wonderfully quirky Michael Sheen and a very experienced Toni Collette already deliver performances worth seeing, they are really upstaged by their young co-stars. Jason Spevack and Samantha Weinstein manage it perfectly that their very overdrawn characters do not degenerate into a joke, but despite their quirks and interpersonal shortcomings close and endearing.

The good play of the actors is still supported by some very pretty ideas, which leads overall to the fact that it is easy to overlook the minor weaknesses of the production. So if you have a soft spot for American indie cinema of the slightly quirkier kind, you're guaranteed to be well entertained by this amusing home movie premiere. Worth seeing!

Conclusion: Jesus Henry Christ is a quirky independent comedy, which at times comes across as a bit forced, but overall can entertain very well thanks to amusing quirky characters, sometimes very wicked humor and its original story. Especially the good-humored actors and some very nice ideas console over minor weaknesses of the staging and dramaturgy. For lovers of American independent comedies a really recommendable DVD, where only the lack of additional material is a little negative